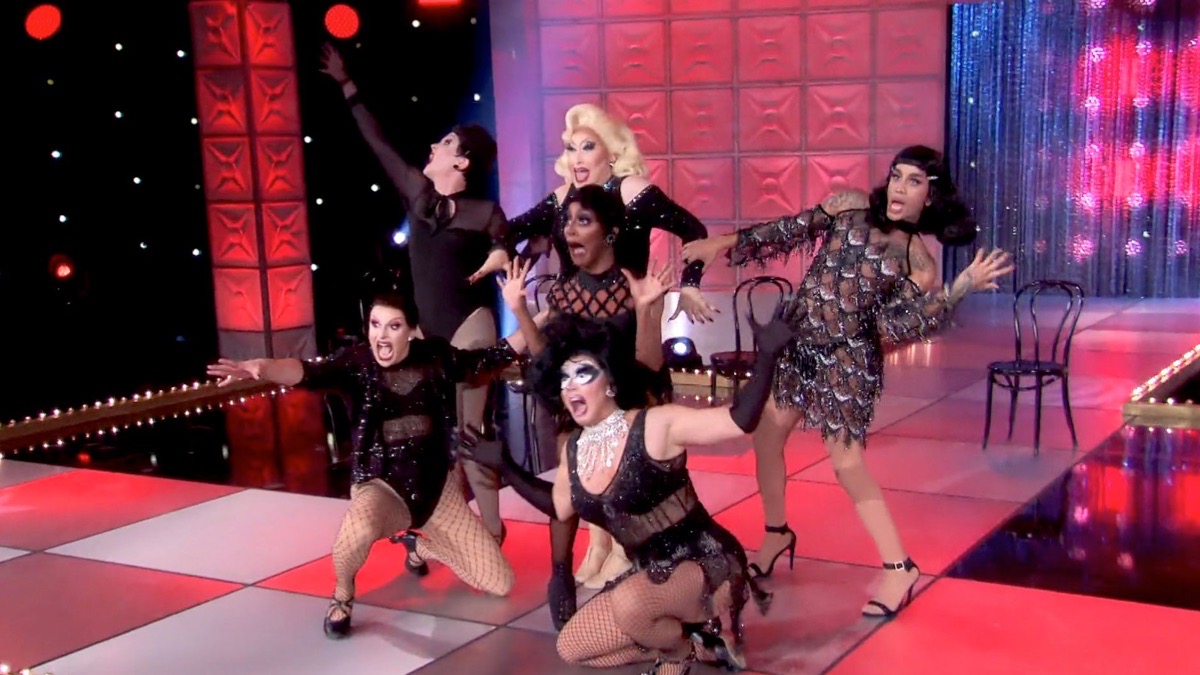 Sorry, this RuPaul’s Drag Race recap comes a few days late, as I was taking a much-needed vacation. Did anything happen while I was away? As you all know, Sherry Pie has been disqualified from the season 12 finale, due to some very unsavory activities. We are going to move forward with these recaps, to acknowledge the hard work of the remaining queens, but will try to keep the Sherry talk to a minimum. We support Sherry’s victims and thank them for speaking out. Their bravery and actions might be what stops future predatory acts like this from occurring.

Okay, now that we’ve addressed the elephant in the room, let’s meet the rest of the season 12 queens and discuss the top 10 moments of the episode. The first mirror message

After last week’s dolls learn that the remaining queens are heading into the competition, Ru tells them to leave a message for the “new girls” on the mirror. After some careful consideration, the first even let the newcomers know that “we done already has oursus.”

This San Francisco queen was the first to enter the werk room and made a very memorable entrance. Coming in with the energy of a Nintendo character, this anime-inspired queen, who looks like the love child of Trixie Mattel and Kim Chi recalled The Shining when she declared, “All tuck and no play makes Rock M. a crazy bitch!” She then proceeded to spin around on the floor, run all over the set and pose on the staircase and climb on the tables. Rock, who is such a cute boy, said she was a “high-energy, comedy anime queen” and proved it in the first minute she was on screen.

3 – The Other Queens Enter

After we meet Rock M., in floats Dahlia Sin, clad in an acid-washed, beaded and distressed denim ensemble, asking, “Are you ready to live a little, and sin a lot?” Dahlia is from the House of Aja and there is definitely a family resemblance.  Then Sherry enters. As much as I am not going to talk about her, her pie entrance look deserves mention (and, on his podcast, “Drag Her”, Mano Agapion said the designer of that gown, Florence D’Lee, deserves props, so here they are. Check out Florence’s beautiful creations on Instagram.) Jan (Sport) enters in a cute sequined and sporty outfit and calls out, “Hey, y’all, let’s play some basketball!” It was a reference to what Fergie said after she recently butchered the National Anthem at the 2018 NBA All-Star Game. No one got it, and, as much as I like Jan, it went past me too. Jaida Essence Hall is gorgeous and walks in wearing a glittery green gown, declaring, “Hey, bitches! She’s here!” and Yes. She. Is. Last to enter is Aiden Zhane with a black pixie cut, lots of latex and announcing that “Season 12 is about to be in-Zhane.” Aiden is from Acworth, Georgia (very close to Atlanta) and says you can’t compare her to any other queen. She certainly stands out in this bunch. (Fun fact: Aiden was part of the Atlanta shadow cast for the Rocky Horror Picture Show.)

As with last week, the queens’ mini-challenge is to present a spring and a fall look on the runway. On the Ru runway, Ru, Michelle and Ross are joined by Sonique, playing Karl Lagerfeld, Kim Chi playing Anna Sui and Michael-Leon Wooley from AJ and the Queen (RIP) playing Andre Leon Talley. Also present are Raven and Zaldy – all of whom don’t really say much during the presentation, which is kind of a bummer.

Rock M hits the runway first, in a gorgeous Comme des Garçons-inspired look that is 100% on-brand for her. She says she drew the anime image on the garment herself, to be able to show her many talents to the judges. I think she did, and I would totally wear this “Harajuku fantasy.” Dahlia wears a chartreuse mini dress with generous feather trim around the shoulders and at the bottom and her look is topped by a big, “orange pumpkin wig.” Then there’s Sherry. Jan is giving a Marie Antoinette look, with a Dolce & Gabbana-inspired corset top and a floral mini. Jaida looks like a beautiful bouquet in a form-fitting dress, showing off her curves and, in case you missed it, she bopped herself in the boob with attitude as she left the runway. Lastly, Aiden came out in a look describes as “April showers bring May flowers.” She wore a bright yellow shift with a sunflower-topped hat and yellow rain boots. Cute.

The queens deliver even more fashion for fall. Rock M is serving koi pond fantasy in a beautiful powder blue mermaid gown with a capelet, with koi swimming across the fabric. I kind of love this look too. Dahlia is clad in a gorgeous gown with black fur and sheer panels. She is glamour. Moving on…Jan is in a full-length green reptile print coat with a minidress underneath and over the knee black boots. Jaida stuns in a perfectly tailored pair of trousers and a jacket with fuzzy sleeves…oh, and a beret. I would also love to own this look, but mostly the ability to pull off those pants. Aiden looks like a Thanksgiving dinner table with a fall print poncho, a gold bowler hat and knitted boots. Another good showing from the fashion-forward divas.

While the queens from last week used rap to introduce themselves to the world, this time around, we’re going from rap to show tunes. Ru challenges the queens to add their own verse to the Fosse-esque “You Don’t Know Me.” As with last week’s main challenge, the queens all have to create their own choreography as well. Considering Dahlia has no idea who Bob Fosse is, this ought to be an interesting challenge. Jan is psyched as musical theater is her thing. Rock M. decides to develop a character to stand out. Rock gets nominated to do the choreography, which is all about “formations” and control. Jaida wants to make sure everyone is comfortable with the choreo, which implies she doesn’t want to do the Fosse moves. Rehearsal is kind of a hot mess, as Rock tries to contend with Jaida’s pushbacks and Aiden, who says she’s “a horror queen, not a Fosse queen.” Everybody gets frustrated and I feared for their performance after this rehearsal. Fortunately, when the queens took the stage, you wouldn’t have known they had so many issues during rehearsal.

The lights come up and the queens are all seated, Cabaret-style. The song is a takeoff on “Cell Block Tango”, with each queen selling their story. Aiden is first, sing-talking and coming off more like a “Fosse queen” than I think anyone expected. She was giving us full Sally Bowles realness too, so I think she really grasped the idea of the challenge. Dahlia also gives us some on-brand cooing and glamour. Jaida also brought the glam, looking like a dancer with her long legs and grace. She shouldn’t have worried about looking bad. Jan kills it, doing some acrobatic moves and showcasing her fantastic singing voice. Rock goes full gangster character with splits, gags and yes, fart jokes. Overall, the song is good, but the rap from last week was so much better. The clip isn’t available online, but you can download the long wherever you get your music.

7 – Thandie Newton and Robyn and Ru

Ru hit the runway looking fab (as always) in a green feathered confection of a dress with a wig of big, blonde curls and the guest judges were just as glam. Thandie Newton, resplendent in animal print said she could now scratch the experience off of her bucket list and Robyn (looking equally as fabulous) told Ru not to fuck it up in her native Swedish.

The runway theme is “tulle” and the queens brought their own unique style to the runway. Aiden went completely against type in a lovely, vintage-looking lime green peignoir with a purple wavy wig. Dahlia was in a big 80s rocker-esque red outfit – with absolutely crave-able thigh-high boots. Jaida looked elegant in a short in the front/long in the back gown in pale yellow. Jan wore an orange tulle jumpsuit and a fluorescent vest, looking like the most glamourous handyman in the world. She brought the “t-o-o-l to the t-u-l-l-e”. Rock walked out in layers and layers and layers of “ 8- to 900 yards” of rainbow-hued tulle topped off with a cotton candy pink wig. They slayed.

Last week, Widow and Gigi lip-synced for victory and no one sashayed away. This week, Jaida goes against Sherry for the $5,000 “tip”. The song is Robyn ‘s “Call Your Girlfriend.” They both deliver the song well, as evidenced by Robyn’s smile through the whole thing. Jaida removes her long skirt to reveal a short one underneath and proceeds to high kick and split her way to victory.

At the end of the episode, the 13 queens finally meet. As this week’s competitors enter the werk room, they come face-to-face with the first seven queens, who greeted them with a collective “Meh.” But Jan wins this confrontation with a quote from none other than Tiffany Pollard.

And so, we’ve met all of the queens and now, the real competition begins. Do you have any favorites yet? We will be back next week with more challenges, fashions and glamour as we recap episode three. Until then, if you can’t love yourself, how in the hell are you gonna love somebody else? Can I get an “AMEN”?