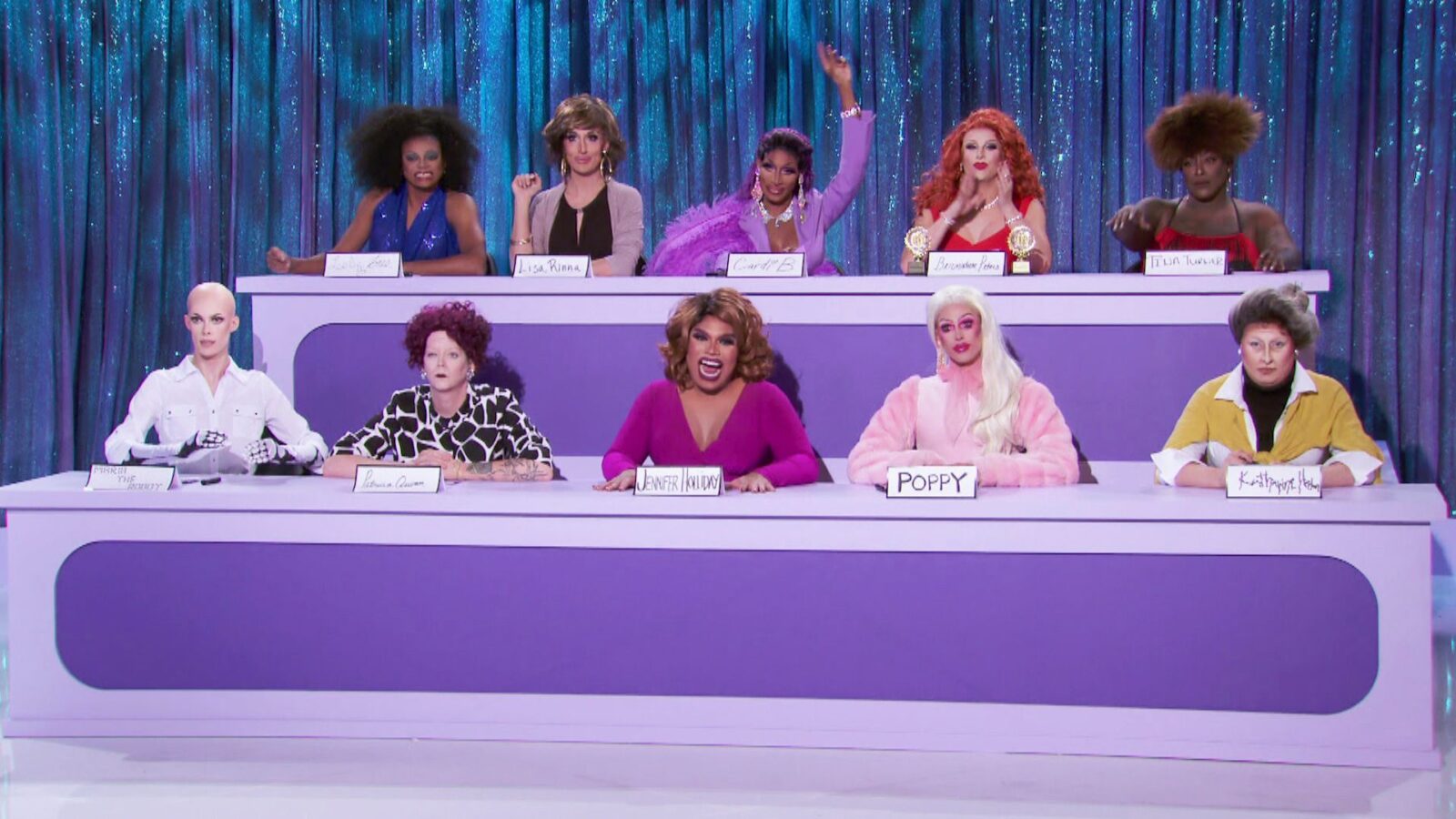 We have arrived at the always eagerly awaited RuPaul’s Drag Race Snatch Game episode, where the queens are serving up their best (?) celebrity impersonations.

We came into the episode with some of the queens questioning recent decisions on the judging panel and our Atlanta queen Aiden Zhane feeling like there’s a target on her back. Heidi vows to never lip-sync again and Jaida reminds everyone that “this is not RuPaul’s Excuse Race.”

Ru enters and announces that it is time for the Snatch Game and the queens are excited. In lieu of a mini-challenge, the queens choose their celebrity doppelgängers  – some of whom leave Ru a little lost during the walkthrough and forcing this recapper to hit Google to find out who some of these people are.

The queens assemble for the Snatch Game and, although this won’t go down as one of the iconic episodes, there were some surprises and funny moments. And on the runway, the queens brought their frostiest, Frozen-inspired looks to the mainstage.

As always, there are lots of laughs, some truly cringeworthy moments, another excellent judges’ panel and the return of a season 11 favorite. Let’s take a look at the top moments from the episode.

The Return of Miss Vanjie

When Ru enters the werk room, he announces that “we have company,” and, with a resounding “BAM bitch!”, in walks Vanessa Vanjie Mateo. As someone whose own Snatch Game performance (as Danielle Bregoli/Bhad Bhabie) tanked, she’s there to help guide the queens so they can bring their best to the panel.

Vanjie tells Jan to make sure she doesn’t change her voice mid-challenge and is there when Ru gives a frustrated Crystal a hug. The highlight of Vanjie’s visit is watching her not-so-subtly hit on Jackie Cox and hilariously mix up Julie Andrews and Julia Roberts.  And then she leaves us with these parting words…

Gigi Goode picked probably the most obscure “celebrity” ever for Snatch Game, Sophia, a robot who does have quite the interesting backstory. Ru had asked Gigi in the werk room, “How do you make a robot funny?” and Gigi showed us all. Her sassy android (who she called Maria) won the game hands down – from greeting Ru with “What’s up, bitch?” to her hilarious facial expressions (especially when she’s trying to smile), struggling to pick up her answer cards and making some convincing robotic movements. It’s easy to see why she was declared this week’s winner.

Jackie pulled out the big guns (but not the big lips…pity) for her Lisa Rinna impersonation. She had it all, loads of props, plugs for everything (including her adult diaper swimsuit) and loads of mentions of her famous husband, Harry Hamlin.  As a confessed “theater nerd” and someone who still misses Smash (RIP), I enjoyed Jan’s take on Broadway legend Bernadette Peters. She nailed her baby-soft voice and got a few zingers in there.

And, just taking this performance on surface value, Sherry’s Katherine Hepburn was also a highlight. For every answer, she scrawled something unintelligible on the cards – which always magically was the answer. Why did she have to be such a bad person? I hate admitting that I thought she was funny.

Although it took her fellow queens a minute to figure out who she was playing, Widow donned a spiky wig to play the legendary Tina Turner. In the werk room, she said she wanted to do Tina and Ike, switching off in the middle of the game. From the reaction of the others, it led us to believe that this might not be the best idea, but Widow’s Ike, referencing the infamous cake scene from What’s Love Got to Do with It made up for her adequate take on Tina.

Heidi should have taken Ru and Vanjie’s advice and used her natural Southern accent and charm to play Phaedra Parks from Real Housewives of Atlanta instead of Leslie Jones, but she was just kind of there. The only Leslie moment she had was when she flirted with “contestant” Jonathan Bennett (Jonathan’s Mean Girls co-star Daniel Franzese was our other contestant, and they were adorable.) Jaida nailed Cardi B’s look, but despite playing such an outspoken performer, kind of faded into the background.

Despite Ru pleading to make the most of her mullet and play El DeBarge, Crystal again brought nothing to the party in her portrayal of YouTuber-turned-pop star, Poppy. But, I also had to Google the singer and in watching some interviews, she did kind of had her odd personality nailed. (And, her music isn’t that bad, actually.) As much as her Poppy didn’t pop, I think El would have been disastrous, as Crystal still has no idea who he is.

Brita brought us a one-note take on Dreamgirls legend Jennifer Holliday that was more of a nightmare. And then there’s Aiden. Sweet, sweet, misguided Aiden. My fellow Georgian was a shadowcast member of Rocky Horror here in Atlanta, so it was no surprise (to me, at least) that she chose RHPS star Patricia Quinn (who played Magenta) as her character. But, instead of giving us Magenta as a comedy queen, she instead gave us preset-day Patricia, who apparently, is a bit kooky and eccentric.

I love RHPS, but I haven’t seen Ms. Quinn since  1975, and had no idea what her personality is like now. Poor Aiden blew off every volley she was served by Ru and looked completely out of place on the panel. Worst of all, she forgot that Patricia Quinn is British and served up no accent whatsoever. If she wanted to do a Rocky character, she should have done Nell Campbell, who played Columbia or, better yet, Tim Curry’s Frank-n-Furter.

The theme this week is “Frozen Eleganza” and the queens brought it, with some looks giving me chills down my spine. Side note: Ru’s violet wig is everything. Heidi (just Heidi per Ru) is serving snow queen realness in a white fur ensemble with a huge hat, furry boots and a matching muff (so we get the obvious joke.) Jackie is inspired by Elsa’s crown and delivers a beautiful look with geometric “petals” on top and a long metallic silver skirt.

Jaida looks like snowbound She-Ra with her ice goddess look. Jan gives us Elsa turned into a white walker from Game of Thrones, but to me, it looks like she got hit with a freeze ray on one side of her body. It’s a cool look regardless of how you look at it. Widow Von’Du tells us she’s wearing her first period piece, dressed as a survivor – albeit a freezing one – of the Titanic, complete with oversized life preserver.

Gigi is positively adorable in a vintage ice cream vendor dress, with blue curls on her head and a huge soft serve cone in her hands. Aiden pays tribute to the Bumble from the classic Rudolph the Red-Nosed Reindeer Christmas special. She has the google eyes as a headpiece and the mouth around her neck, but the rest of her look, as Michelle put it, is “very simple.”

Brita wears a lovely iridescent gown and icy blue hair. Crystal is wearing elegant silver pajamas that I kind of covet. Her face and hair are also painted silver and she says the look is a nod to Batman villain Mr. Freeze.  For the first time, we didn’t even see Sherry’s walk down the runway, but her look seemed very nice.

When Ru asks Jonathan who he would play in Snatch Game, Jonathan says he would choose Valerie Cherish, as played by Lisa Kudrow on the (gone but not forgotten) series The Comeback. I can only pray that Jonathan shows up on Celebrity Drag Race and they have their own Snatch Game episode because Jonathan’s impersonation is spot-on and hilarious.

Lip Sync for Your Life

Not surprisingly, when the runway theme is Frozen, the lip sync would be to the earworm “Let it Go,” pitting Brita against Aiden. I think Willam calls it a “park and bark”, but with a ballad, there’s really no time for leaps and splits, and the queens just have to sell it. Brita works the stage and even does a little magic and Aiden, try as she might, again fades into the background. As with most of the lip syncs this season, it’s kind of lackluster, even with falling snow on the runway, but it’s obvious who is sashaying away – and so, we say farewell to Aiden Zhane. Hopefully, we can all do the Time Warp again with her.

And that wraps it up for another episode of RuPaul’s Drag Race. Until next week, wash your hands, stay indoors and if you can’t love yourself, how in the hell can you love somebody else? Can I get an “amen”?