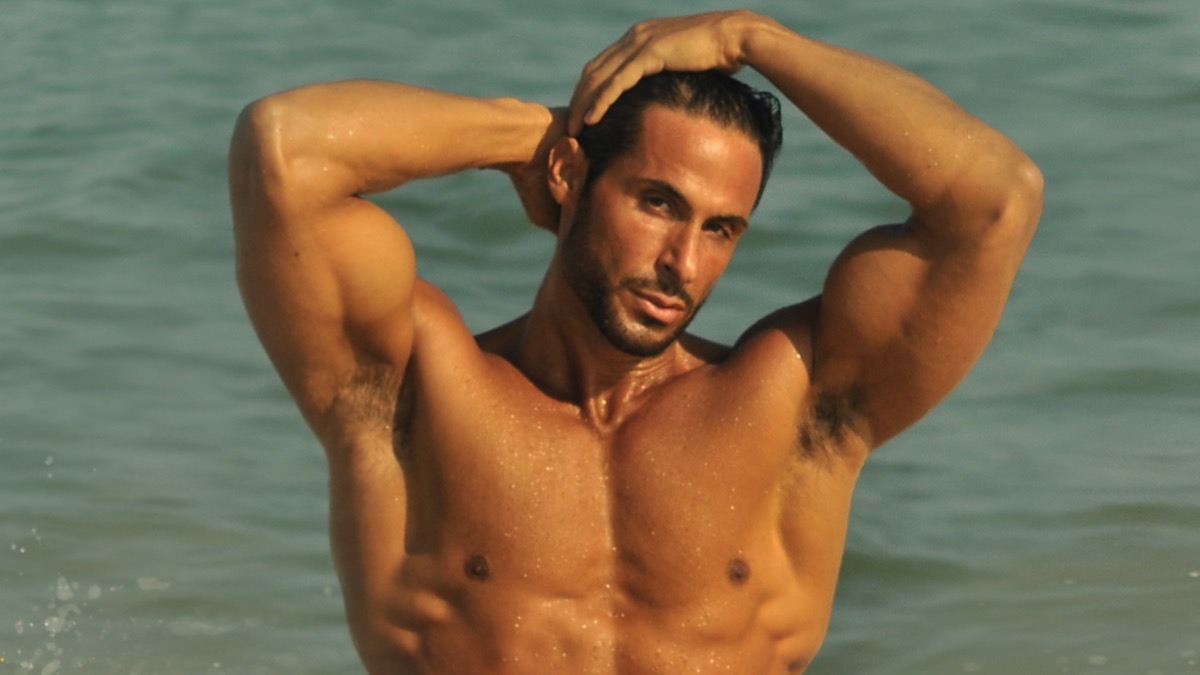 Model Anthony Catanzaro, once known as the “Superman of Fitness” had a successful career as a fitness model, personal trainer, and even a male stripper. He appeared on the covers of such magazines as Playgirl, Men’s Exercise, and Men’s Fitness.

During a live TV event celebrating Betty White’s 91st birthday, Anthony, who was set to pop out of a cake for the iconic actress, noticed something was wrong. His normally limber body tightened up.

He assumed it was an isolated incident but two years later, the left side of his body had become so rigid that he finally sought the help of a doctor, who diagnosed him with early-onset Parkinson’s disease.

The news was a real test of Anthony’s strength, in both his body and mind, but he maintained a positive attitude, stating, “Sometimes you simply have to trust in God and continue on the journey he has given to you.”

Anthony has kicked of the latest chapter of his life with the publication of HEAT, his brand-new coffee table book featuring 165 pages of photos by John Falocco and original poems. In the book, he reflects on his beliefs and philosophies and imparts his own brand of wisdom that emphasizes the importance of health, wellbeing and maintaining a positive outlook on life.

“The most important lesson humanity needs to learn is to appreciate, value and respect one another,” he says. “Nearly every poem I have written in the book touches on these themes.”

He chose to title the book HEAT, not only because of the steamy pics throughout its pages, but because fire is essential for life. “It’s important we maintain control of our inner fires because they can burn and destroy, if we’re not careful,” he adds. “No matter what we face in life, it’s important we stay balanced and in command.”

He hopes that the photos and inspirational poems in the book will help others to push through their physical, mental or health limitations.  “There is beauty in everyone and everything, but it only shines when we allow it to.  We need to stoke our inner flames and bask in the HEAT.”

Anthony is truly an inspiration and he shares even more in our Socialite Seven. Get to know this man who is truly beautiful inside and out.

Why did you decide to share your story with the world?

At first, I wanted to keep it a secret, I was afraid I was going to lose my fans and admirers. I thought that they would look at me differently. But, as you know, Parkinson’s disease is very hard to hide. Although I do a pretty good job of it, you can tell when I’m not feeling well because my meds will switch off like a dime. I have to take this medication every 2 hours, 24 hours a day because if I don’t, I will not be able to move or even comb my hair.

Have you learned anything surprising about yourself as you put together Heat?

I have learned that I have tremendous will power and when I want to do something, nothing or no one can stop me. When I was first diagnosed, I never thought in a million years I would be able to write a book, but I knew I had the words inside my heart, so I put them in the form of poetry and quotes. As you browse through the book, there is a quote or a poem to go along with every photograph. The book is exciting, inspirational and very touching to read.

Who would you want to play you in the story of your life?

Hmmm, I’m not really sure who that would be, but I know one thing for sure he would have to be very energetic charismatic a bit cocky and overly confident, funny and a little bit off the wall.

What is the last movie you saw that really moved you and why?

That would be Heaven is For Real. It is a beautiful story about a child who is the son of a pastor who was struck with appendicitis and was rushed to the hospital. Complications began and the child almost died. When he awoke from the anesthesia, the surgery is a success but the child claims that  Jesus brought him to heaven but then returned him minutes later to earth to answer his crying father’s prayer. The child began to know things that he could not have known. It’s a great movie!

I used to say that all the time, that I cannot live without this or that.  But having Parkinson’s made me realize how precious everything was and that just being happy healthy and alive is all you will ever need.

What talent would you like to wake up with tomorrow?

To be able to heal the world of all illnesses both physically and mentally.  To be able to fight for justice, to save and protect, to love with all my might. To truly be Superman and save the world.

If you could offer advice to your younger self knowing what you do now, what would it be?

To not take things so personal, to understand that everybody is going through something, to show a greater form of compassion and to share my wisdom with others. I truly believe that we are all put on this earth for each other. I believe we are all brothers and sisters in God.

HEAT is available exclusively at tonycatanzaro.com and each copy includes a personally autographed 12×18 poster. 100% of the proceeds of the book will benefit Anthony’s battle with Parkinson’s. You can also follow Anthony on Instagram and Twitter.