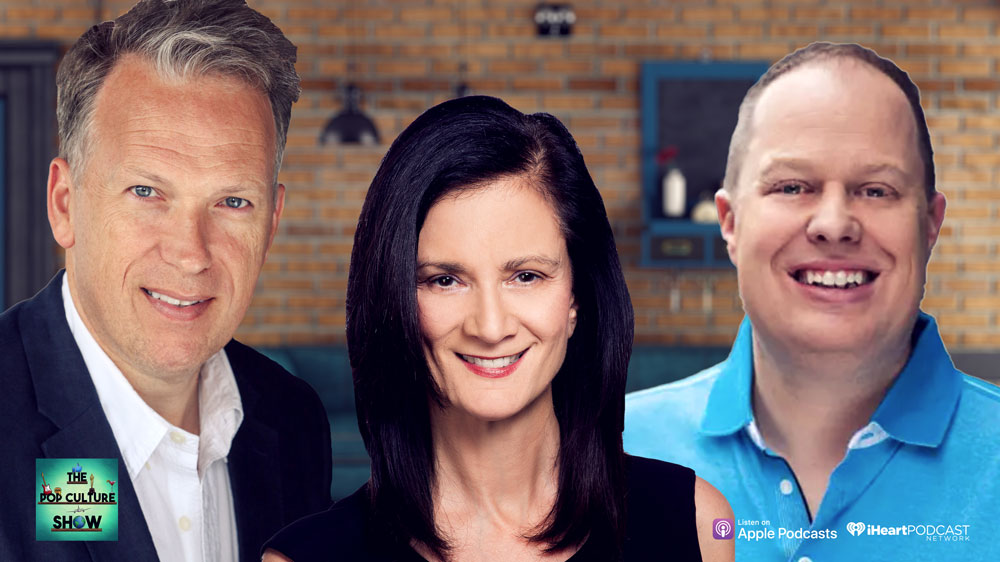 What started as a quarantine-inspired reunion of Atlanta’s favorite morning radio team, The Pop Culture Show has become a bona fide success, ranking among the top 25 of the Apple Podcast Entertainment News US chart.

Leslie Fram and Steve Barnes were part of the Morning X radio show on Atlanta alternative station 99X from 1993 to 2003 (along with Jimmy Baron, who was part of the podcast’s initial test run.) Leslie is currently SVP of Music & Talent at CMT (Country Music Television). She oversees CMT’s “Next Women of Country” campaign, mentoring female artists and is co-founder of “Change the Conversation” to help fight for gender equality in the music industry. She also serves on many music industry boards including The Recording Academy, The ACMs and Save the Music.

Paul “Cubby” Bryant is the current top morning show host in NYC, on 106.7 WLTW. He’s been a legendary name in the radio industry for more than 30 years, including time spent co-hosting with Oscar, Emmy, Grammy and Tony Award-winner Whoopi Goldberg on her nationally syndicated morning show.

We had a chance to chat with Steve Barnes about the evolution of the show, his pop culture picks and lots more. Read on and discover why The Pop Culture Show is a podcast you should know.

I know this was initially going to be a limited run podcast, why did you decide to make it a weekly show?

We had zero intentions of doing more than a few episodes. We started getting requests from sponsors, agents and fans to keep it going. We were all very busy but with our radio background it isn’t a heavy lift to do a weekly show. I do all of the editing and producing which makes it even easier for Leslie and Cubby! But, I love it…editing is fun watching a rough piece of work get polished into a show.

What has it been like being back on the air with Leslie after all this time?

We got back on the “air” a few years ago and it was strange. Strange in the fact that it was like we only left for the weekend and not 10 years. We turned on the mics and just picked right up. Chemistry is something that is hard to explain. It’s like an old married couple in the way that you kind of know what to expect and you play off of it.

How has it been with Cubby joining the show?

Cubby is a gifted talent. We have been great friends since 1991 when we met at a mutual friends’ wedding. I always thought it would be fun to work with Cubby. When Jimmy left (to focus on real estate) Cubby was both of our first choice. It took a bit of work to get him to commit because he had a full schedule already. Between a new baby and the #1 morning show in NYC he was a bit busy. But I got him to the finish line. Sucker!!

What interests you in pop culture?

I love it all but really love reality tv, music and cultural entertainment trends. It’s amazing how things shift, especially when you look back at any recent era. The music, the fashion. the technology…it’s always changing and it’s fun to watch and often make fun of in the rearview mirror.

What other things do you do in real life?

I am the President of Barnes Creative Studios which keeps me on the road about half the year. I produce high end video for commercial real estate and luxury hotels all around the world. I also have been acting for 30 years and really enjoy that as my “jobby” (hobby job). Currently I am filming a drama series called Saints & Sinners and also have a new pilot in the process now called Government Records. I play the head of the ATF in that one as a lead character. Hoping that one gets traction as the script and concept are amazing. A few other cool things in the works and it’s always exciting with the cool opportunities that come around.

How do you choose what stories to cover or talk about?

I already read the hell out of Twitter and the internet as a whole. We all 3 do so putting a show together is pretty easy but, again, we all have years of experience doing that and knowing what to look for.

What do you enjoy talking about the most?

I enjoy bringing real life stories to the table. It’s crazy the scenarios I bring into my universe. All of my life it has been that way which is so strange to me. I have one I am going to bring up soon that is CRAZY. It involves a neighbor and a camera. That’s all I can say. Listen and you will hear it soon and I will want to know what you would do in this crazy scenario!

Is there anything pop culture-related that you think is overrated?

Social media “influencers” by a mile. I am talking about the fake ones that want handouts. I see it a lot with our resort clients. You would crack up if you saw the proposals from these people.

What has been your favorite episode to record?

That’s a tough one. I truly look forward to it every week. The fun part is that we don’t all talk about stuff prior, so we never know what is coming from someone. None of the “moments” are planned which some people don’t believe. It’s true. Both Leslie and Cubby always surprise me whether with a reaction to something or something that comes out of their mouths. I guess the answer would be all of them.

Who has been your favorite podcast guest?

Another tough one because they are all fun. I feel like I learn stuff about each of them that I never knew which is surprising because they are so high profile. The fact that they still have unearthed fun facts is baffling but they do. The one that has had the most impact on me was Dr. Oz. He got me to quit drinking Diet Coke (and all bad sugary drinks like it). I thought he was fascinating and just a wealth of knowledge.

Who’s your dream “get” as a guest?

Here’s my incomplete list —-> Reese Witherspoon. Been chasing her as a guest my entire broadcast career. I’m hoping Cubby or Leslie surprise me someday.

Are you surprised about the success of the podcast?

Shocked. We are having a blast doing it and would probably do it even if we had no one listening. The surprises have been in the global rankings. In the US we’ve been as high as #4 on the Apple Charts but we are often top 10 in other countries which we don’t even understand. It makes for funny segments. We love joking about it like last week we announced we were moving to Denmark because we are #7 there.

What other podcasts do you listen to?

I love the entrepreneur podcast called “I Make a Living” with Damona Hoffman, “Ride the Lightning” which is a Tesla podcast, “The Real Life Actor” which is done by Jeff Seymour who is an incredible coach and all around funny dude. You can also add ANY true crime podcasts because I can’t get enough of them.

What do you think the future holds for the show?

Who knows. Do you?