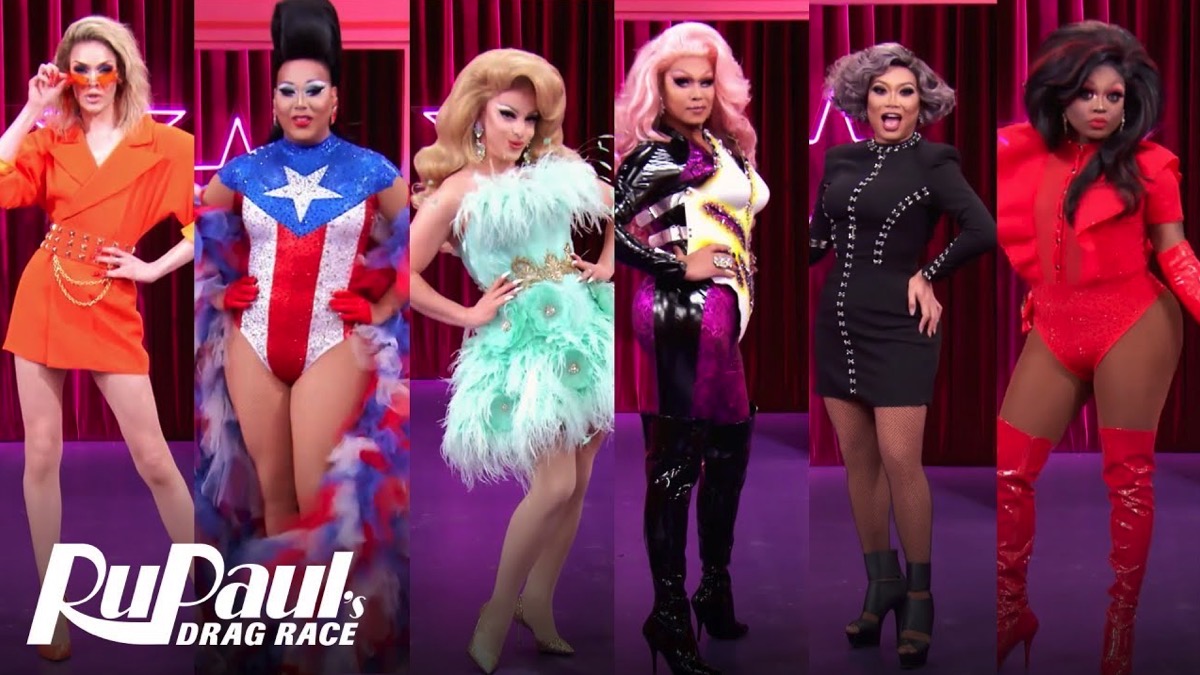 Well, hello, RuPaul’s Drag Race fans! There’s been a lot going on in the world of drag this week.

We finally learned who will be competing on the eagerly anticipated fifth season of RuPaul’s Drag Race All Stars and were treated to performances from a whole bunch of Drag Race alums as DragCon goes digital.

The queens weigh in on last week’s fantastic drag family makeover challenge and as always, we’ve got news and videos from some of your favorite entertainers. We’ve got lots to cover, so let’s bring it to the runway!

Of course, the big news is the reveal of the queens competing on season 5 of RuPaul’s Drag Race All-Stars. On Friday, after lots of speculation and predictions, the queens werk room entrances were ru-vealed. Jujubee, Shea Couleé, Ongina, India Ferrah, Blair St. Clair, Miz Cracker, Derrick Barry, Mayhem Miller, Alexis Mateo and Mariah Balenciaga are all competing for the crown and I can’t wait for this season. RuPaul’s Drag Race All-Stars 5 premieres Friday, June 5 at 8:00 p.m. on VH1.

Not that you need to actually meet these queens, but the cast of All-Stars 5 talk about their entrance looks in this “Meet the Queens” video.

Jujubee and Bob the Drag Queen discuss their Drag Race wins and losses and rate the queens on their superfan makeovers on the latest episode of “The Pit Stop.”

Raja and Raven toot and boot the family resemblance looks on “Fashion Photo Ruview.” There are a lot of boots this week, and no mention of the lovely Tara Misu, a/k/as Janet the Planet, which is kind of a shame. But still, It’s always a fun watch.

Nina Bo’Nina Brown discusses the challenges of makeovers (and relives her tragic makeover episode of Drag Race) as she transforms Pierre into Nina (in a creative look that may or may not be inspired by Grace Jones) and discusses the Superfan makeovers on the latest “Rawview.”

It could be the fact that quarantine is making everyone a little crazy, or it could just be her eccentric personality, but this week Miz Cracker serves up an especially kooky episode of “Review with a Jew.” Since there was no eliminated queen last week, Cracker interviews herself this time around.

Yuhua Hamasaki and our favorite cucu queen, Cynthia Lee Fontaine discuss the makeovers and runway looks of the latest episode of “Bootleg Opinions.”

Vanessa Williams once again snatched a crown, this time as the champion of episode two of Celebrity Drag Race, defeating comedienne Loni Love and Tami Roman. The celebs were coached by Asia O’Hara, Trinity the Tuck and Alyssa Edwards, but Ru’s make up muse, Raven, also stopped by to drop some wisdom on the stars, and you can catch her advice on the latest “Just the Tip.”

Digital DragCon was last weekend, and, although the event reminded me of all the fun I was supposed to have in Los Angeles last weekend, it was great to catch up with the queens. A couple of performances from the event were true standouts. Alaska, Roxxxy Andrews, Detox and Katya recreated their iconic performance of Ru’s “Read U Wrote U” from All-Stars 2 and it was as epic as you’d expect it to be.

Another amazing group performance was brought to us by season one of RuPaul’s Drag Race UK, when Baga Chipz, Divina De Campo and Blu Hydrangea joined forces and the Frock Destroyers were born. Well, since we’re in quarantine, Blu recreated the song and played all of the parts.

After she was sent home this season, I was hoping that Jan was going to continue her “Jan’s Jukebox” series, where she performs covers of the lip sync for your life songs and, thankfully, she is. On this episode, she joins her Stephanie’s Child bandmates Rosé and Lagoona Bloo to perform Katy Perry’s Firework, which is the song that sent Widow Von’Du home on the ‘Choices” episode.

As the temperature is rising, you might be ready to cool off and enjoy some refreshing watermelon. You might also be bored enough to see how many rubber bands you would have to put around a watermelon to make it explode. If you’d rather just watch someone do it for you, let Willam do the messy work for you. In another of her hilarious videos, Willam works that watermelon, records an episode of “Race Chaser” with Alaska and gives our eyes a treat with a cameo from Handyman Dan.

As part of their “Stay the F***” home programming, our pals at WOW Presents Plus have given us a gift to keep us entertained while we’re trapped at home. In the new web series, Golden Pandemic, which had its premiere on Wednesday, some of our Drag Race favorites show us what life would be like for the Golden Girls in the pandemic age. Tempest DuJour plays Dorothy and gives us pure Bea Arthur, Mrs. Kasha Davis is a terrific Sophia, Pandora Boxx is a lovely Rose, and Ginger Minj gives us a sultry Blanche. Decider shared a clip from the premiere and three new scenes drop each week on WOW Presents Plus.

Honey Davenport again welcomes a queen with a fantastic name, Tina Burner, the current reigning National Miss Comedy Queen, to discuss random topics on another episode of “Da Fuq.” If you want to hear about cocaine-packed bananas, a real estate feud over a pink house covered in emojis, a Brazilian prison break and more, this is the show for you.

There’s no doubt that Bob the Drag Queen is hilarious, and, if there was any doubt, this stand-up comedy set from our season eight champion cements it. Watch as she talks about living in New York, how women are smarter than men and the bond between gay guys and straight girls. Check it out on Comedy Central’s Facebook.

Alyssa Edwards shares her thoughts about the season 12 queens in a fun interview with #NoMakeup #NoFilter. It’s always a pleasure to hear from our tongue popping queen.

Trixie Mattel is not afraid to take risks for her art and has tested drug store makeup so you didn’t have to. In a previous video, she threw a lot of shade at the low-price brand wet n wild and felt she might need to give the cosmetics a second try, which she does in this video. Watch as she creates her signature face in affordable products and actually finds a few she really likes.

We are taking another trip back to our childhood with Trixie this week, as she takes us to the 90s on her latest “Decades of Dolls” video. The 1990 holiday Barbie (which Trixie describes as “Angelyene if she were President of the US”), birthday Barbie, Totally Hair Barbie and Ken, Ski Fun Barbie and Ken, Western Stampin’ Barbie and even the “controversial” Earring Magic Ken.

Miss Coco Peru does a little drag show and tell with San Francisco drag royalty Peaches Christ on “I’ll Show You Mine”. Coco shows off her “moon rocks” and Peaches shares a souvenir from her first feature film as a director and the pair share tales of movie-making, hanging on to stuff and their love of haunted houses.

Speaking of drag royalty, Varla Jean Merman is bringing her one-woman show to your home, for free. GROWLR, the bear social network, started airing live shows on its app and has already streamed live shows from Big Dipper, everyone’s favorite furry rapper (and the producer for Willam and Alaska’s “Race Chaser” podcast) and Jackie Beat.

This Saturday, May 16, comedian Varla Jean Merman continues the stand-up with her one-woman comedy show, performed live from home. What makes this programming different from most other performances being offered during this time of quarantine are these shows are free to viewers and they support queer artists as GROWLR isn’t asking the performers to donate their time. The app is paying them for their performances, just like a brick and mortar bar or club would do. All shows will air on GROWLr Live, the in-app live video broadcasting feature on GROWLR.

The always outspoken Gia Gunn covers a wide range of topics with Joseph Shepherd in the latest interview for his great “Exposed” series. She kind of got the villain edit, but there’s so much more to her. She discusses her start in drag (and the season one queen who helped her get her start), her experience on season 6 of Drag Race and lots more.

Jaymes Mansfield transforms a honey-hued Tokyo Stylez wig from Bellami Hair into another bouffant masterpiece. The end result is fierce (and I love the color) and serves a look Jaymes describes as “Carol Baskin is she were played by Lana Del Rey.”

Kameron Michaels, who recently chatted with us from quarantine, shows you how to create a “neutral” eye look in this tutorial. Gorgeous guy, stunning queen. I am so in love with this look, but I don’t have the patience (or the products) to achieve this beautiful look.

Well, that wraps up a busy week for the queens of the Drag Race universe. We will be back with more next week, as we inch closer to crowning a season 12 queen. So, until then, stay safe, stay healthy and say LOVE!