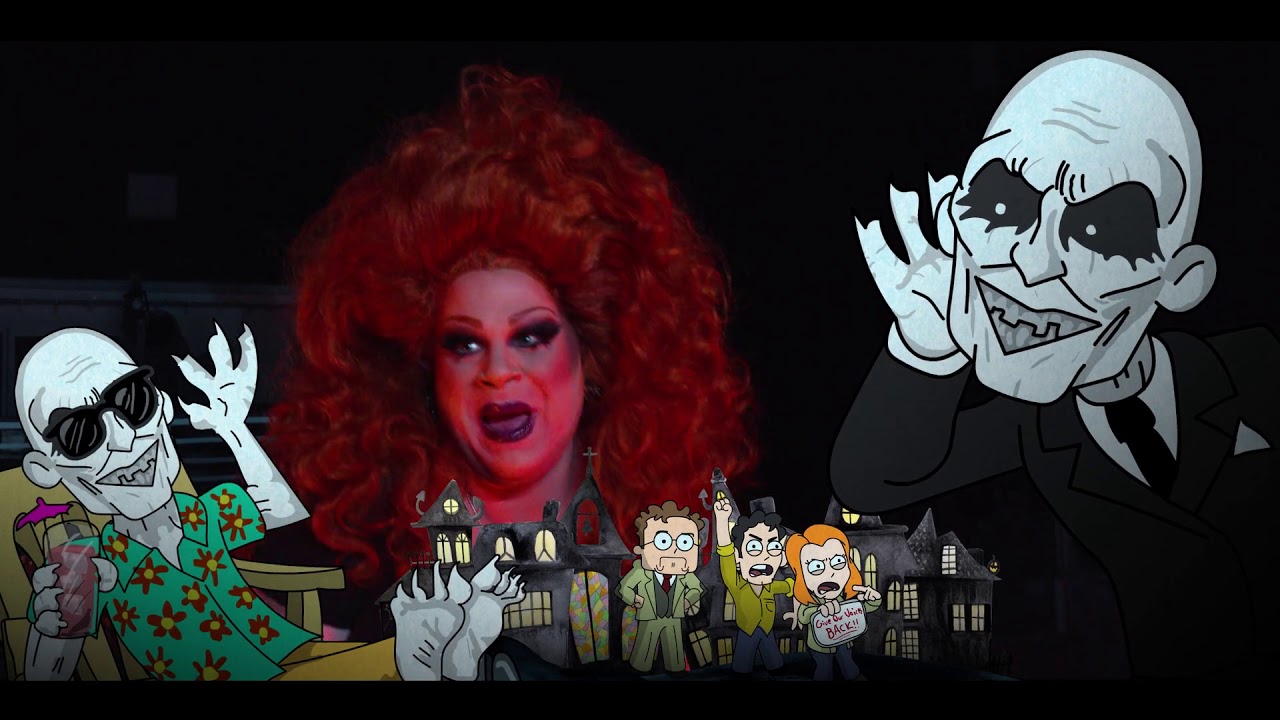 Hello, hello, hello! Welcome to another wrap-up of the best moments of the week from the queens of RuPaul’s Drag Race (and Dragula too!) in the Week in Drag! We know you’re probably not quite ready to say goodbye to Halloween, so we’ve got some leftover treats that we couldn’t deprive you of. There’s also lots of videos from your favorite queens, including Trixie playing with dolls and Bob bringing us a musical flashback to our youth. Get ready for the last batch of spooky surprises for 2020 and let’s bring it to the runway!

If you’re not finished watching scary movies, Trixie and Katya, living their Power Rangers fantasy, have some suggestions for you in the latest edition of “I Like To Watch.” The pair showcase highlights and OMG moments from some of Netflix’s most bone-chilling movies, including House at the End of the Street, In the Tall Grass, We Summon The Darkness, Cabin Fever and Hush. Grab some of your Halloween candy and watch these fun, frightening flicks (I really liked We Summon the Darkness, but all of these are solid.)

There’s more holiday fun as Trixie and Katya take on Halloween on “UNHhhh.” Along the way, the pair discuss random topics including religion, scientology, trick or treating, their favorite candy and making kids cry (which they enjoy, proving I must be related to them.) They also talk about home invasions and what truly scares them (and it’s not horror movies). And, in this week’s fan-submitted question, they help a viewer with tips on how to spice things up in the bedroom.

Nina West is vying to take the “Queen of Halloween” title from Elvira and she has come to lay with a star-studded video. Her new Spooktacular Variety Special “Heels of Horror” began streaming on VIMEO on October 28, and as part of the special Nina created an ode to one of her favorite TV shows of all time, Buffy The Vampire Slayer. The video for “Nina the Vampire Slayer” features the voice of SNL‘s Taran Killam as well as an appearance by original Buffy cast member Anthony Stewart Head. If you’re looking for more frights and delights, head to VIMEO  and watch the three-part “Heels of Horror” event – it has overtaken It’s the Great Pumpkin, Charlie Brown as my new favorite Halloween special.

Willam, who has treated us to some amazing costume loos this season, gets painted by the lovely Pearl and presents “Apanda Lepore.” As someone who loves both pandas and Amanda Lepore, I am adoring this look. Best of all, I have a year to practice applying this makeup for next Halloween.

The lovely Honey Davenport, leaving her glam look behind for a more creepy countenance, reviews and reacts to the Boulet Brothers Dragula: Resurrection special.

Speaking of Resurrection, Honey teamed up with Dragula’s Loris for a new single and video for the song “Freak Planet,” which dropped on Friday. It’s not only a spooky delight, it’s also shares an important message.

Another fierce Dragula and Resurrection contestant, Saint, collaborated with season 12 queen Aiden Zhane for a goth rocker called “Boo!” If you are a fan of Marilyn Manson, this track is right up your alley.

No Halloween weekend post would be complete without an appearance from the wonderful, wig-tastic Jaymes Mansfield. She’s spent the month of October showing us how up our costume game with some creative (and affordable) wigs. In this video, she takes a Katy Perry “California Girls” and turns it into a “bionic Wednesday Addams” look.

It’s a double dose of wig wizardry from Jaymes this week. Watch as she works her magic on some ultra-cheap $10 wigs from Party City. She uses her triple stack technique and, with a little help from some crafting materials from JoAnn Fabrics, creates a big blue muppet monster fantasy. I LOVE this wig.

If you didn’t know (and I can’t imagine anyone who wouldn’t) Trixie Mattel got her name from the famous doll manufacturer so, obviously, she loves dolls. This week, she’s back with another unboxing of the latest dolls from Barbie. We’ve come a long way since Malibu Barbie for sure. Check out these new “Career of the Year” campaign team dolls and pick some up for the kids on your holiday list.

Did you miss Willam and Alaska’s “Name that Tune” extravaganza? Well, fear not, as they have posted the whole thing to YouTube. Who will prevail? Team Blue: Willam, Bob the Drag Queen and Peppermint or Team Pink: Alaska, Sherry Vine and Bianca Del Rio? Tune in and find out!

Here’s another fun musical (and educational) moment from Bob, as she sings “Yakko’s World Song” from Animaniacs.

Drag Race UK’s Sum Ting Wong has been bringing us lots of memorable musical moments with her “Just ‘SUM’ Music” videos, and this week is no exception. Watch as Sum Ting sings a beautiful cover of Madison Beer’s song “Baby.”

Season 12’s Miss Congeniality Heidi N Closet is back with another episode of “Gap Chat.” This time around, she discusses her infamous (and meme-worthy) Untucked meltdown and the allergic reaction she suffered on the show (from kale.) She also answers the question “What Would Heidi Do?” when it comes to hates and liars. She also reacts to some of her standout season 12 moments, including the “creation” of Heidi’s Hydrates (copyright RuPaul), being the self-appointed “trade of the season” and her Leslie Jones “Snatch Game” performance. If you’re looking for some advice, she’s also got tips on improvising drag after your stuff gets lost and dealing with an unfaithful partner. I love me some Heidi.

Atlanta queen (and season 6 contestant) Trinity K. Bonet ranks all of Valetina’s season 9 looks. Does her entrance look get a “heel” or a “flat”? Where does the masked look that sent her home stack up? Watch and learn!

That’s all for this week, as we bid a fond adieu to Halloween 2020. We’ll be back with more from the queens next week, but I will leave you this week with another fabulous Atlanta queen, season 2’s Nicole Paige Brooks with a fun performance of “Don’t Call Me Up” by Mabel. Until we meet again, stay healthy, stay safe, VOTE! and say LOVE!