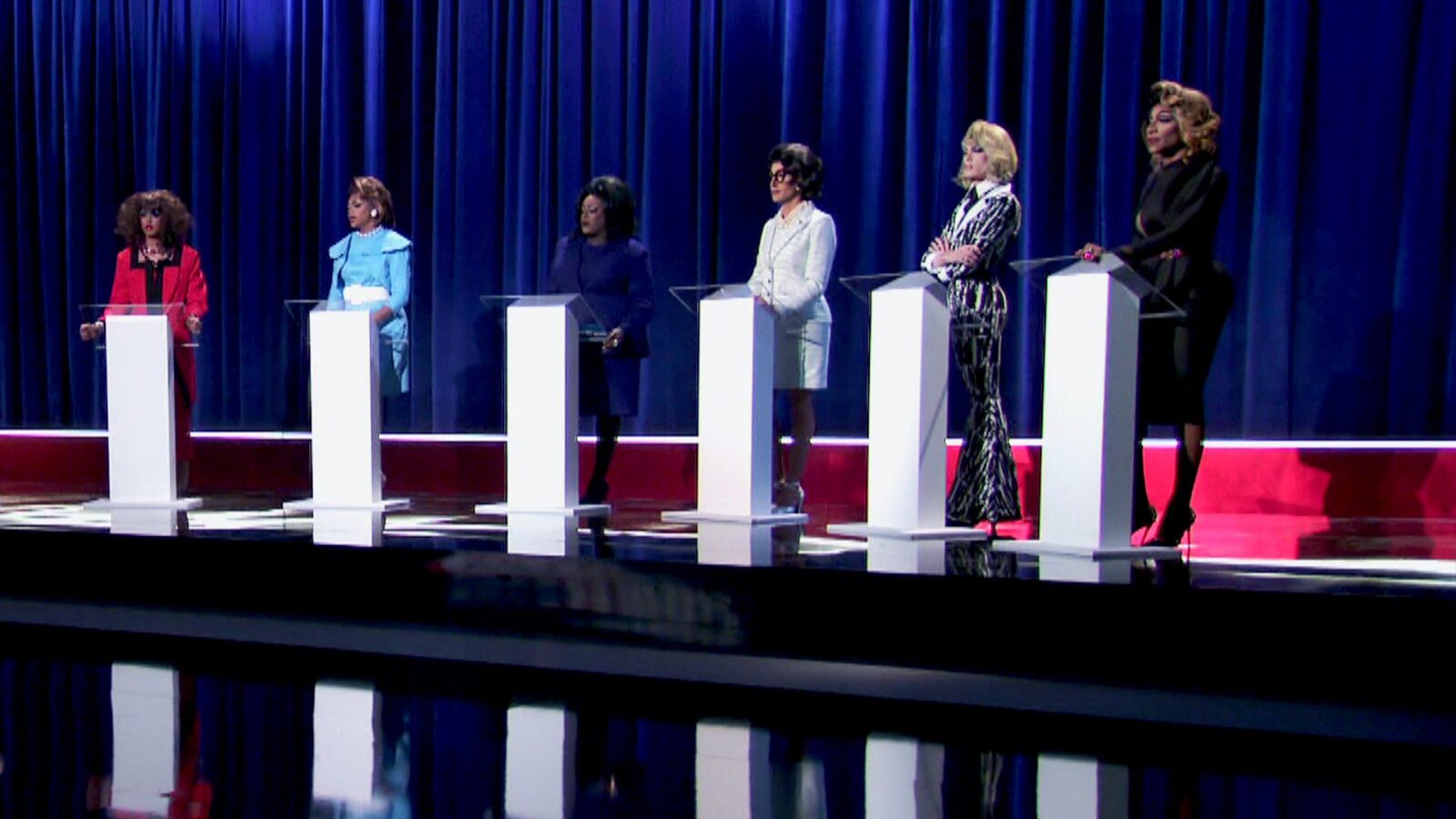 With all of the chaos going on in the world, our weekly check-in with the queens of RuPaul’s Drag Race season 12 is the warm hug we all need to get by, isn’t it?

Since our actual elected officials can’t screw things up much more than they already are, there’s really no better time than the present to put a drag queen into office, and these dolls show that they have what it takes to effect change, as they take part in the “Choices 2020” debate.

We also get a crazy cat-themed mini challenge and a runway that mirrors the queens’ patriotic promo looks.

So last week, we said goodbye to the lovely and very enthusiastic “robot cheerleader baby bitch” (™Jaida Essence Hall), Jan and Heidi was delighted with her win, as it brought her bank balance up to $5,000.33. We also saw the first crack in the previously unstoppable Gigi Goode. There’s a lot to talk about, so let’s take a closer look at the top moments from the episode.

In one of the most fun (and yes, completely pointless) mini-challenges ever, Ru tells the queens that they will need to channel their inner feline and give us their best cat looks in the “Kitty Girl 2020” challenge. Quick drag and cats. Sign me up. Crystal looked so cute as a Grumpy Cat-inspired “Mad Cat” who made sure to knock a vase off of a table as part of her schtick. Jackie Cox wins as soon as she begins by referencing someone in Ru’s wheelhouse, the iconic (and best Catwoman ever) Eartha Kitt. Theater kid Sherry went the musical Cats route, giving us “Shesafella.” Heidi admits she’s a “dog person” (same, girl, same) and doesn’t know how to act like a cat, and she shows it. Widow goes all in, playing aggressively with a ball of yarn and being taunted by Ru, who plays with a laser pointer. Jaida (no surprise) serves us a sexy, pole-climbing cat, and Gigi gives us one chic, fashion-forward kitty. But, as I mentioned, Jackie was deemed “purr-fect.”

For this week’s maxi challenge, the queens are vying for the title of the first drag queen president, presenting their platform and answering probing questions in a debate called “Choices 2020.” When Ru comes to do the walkthrough, he’s accompanied by his “political advisor”, the always welcome Raven, who lends her two cents to Jaida and Jackie’s plans.

As for the debate, it was classic Drag Race. Moderated by this week’s guest judges, Rachel Bloom and Jeff Goldblum, the challenge brought out some funny lines as well as a few “oof” moments. Sherry vowed to take America off its diet, Crystal says she should be president because she’s “business in the front and party in the back” (she is working that mullet), Heidi is giving us Southern belle realness and says she’s here to “bridge the gap” (showing off her signature smile).

Widow said change can only be made if we all do the Hokey Pokey (she tried) and Jackie, who would be the first Canadian president claimed to be as American as “apple poutine”. “Pantsuit advocate” Gigi again uses fashion as her platform and lets us know she’s a human girl – NOT a robot and Jaida is a candidate “of the bitches, for the bitches.”

The strong players here were Jackie and her constant Canadian references, Jaida with her distraction technique (repeatedly telling Jeff to “Look over there!” when faced with a difficult question and Heidi, whose reactions were priceless.  Widow and Gigi were the weak spots, with Gigi just coming up stiff and Widow taking things too seriously.

Of course, there is lots of shade and Jaida introduces us to the phrase, “I would like to retattle the retittle of that rebuttal.” My favorite moment in the whole thing is when Jaida admits she’s confused, Rachel asks if she’s smelling toast because she might be having a stroke, Heidi softly mutters, “I like toast.”   Oh, and I think every debate should end with the candidates and moderators twerking to RuPaul’s song “Peanut Butter.”

For whatever reason, Michelle is absent from the judges’ panel this week, but she (and in a quick cameo, our favorite sexy broccoli Dahlia Sin) joined the show on a “live” remote from Tuckahoe. After “national treasure” Jeff Goldblum’s introduction, Michelle cut in and told him that even though she was married, Jeff is her “hall pass. She went on to gush, “I’ve seen all of your movies, I know what you can do with your fly” and asked for just one night. Jeff blew her off with a bored, “Thanks.” Sorry, Michelle.

The queens once again showed their patriotic side with this week’s runway. Crystal is rocking a red fedora and wearing an outfit made up of mismatched textures and thrift shop pieces. Heidi gives us a look Carson describes as “old glory…hole,” but it’s really cute. From her red Bettie Page-inspired wig to her red “hooker high heel” boots, she looks amazing. Widow brings the drama in an afro wig and a black dress with white flourishes and glittery stars on her shoulder and hips. Sherry is a white trash honey in cutoff shorts and a distressed denim jacket – a look Carson calls “Betsy Ross Dress for Less.” Jackie wears a lovely red striped caftan with a navy hijab outlined with silver stars.  Gigi made Carson “Yankee Doodle randy” in a red velvet coat and topped with a feathered tri-corner hat. You know Mom helped with this one. It’s great. Also great is Jaida’s sparkly, sexy superhero look.

I loved Crazy Ex-Girlfriend and was delighted when it was announced that the show’s star was going to be on the show. She was hilarious with her questions and reactions (and her twerking) during the debate (and I love her yellow dress.) She also doled out the jokes and some good advice to Widow, telling her that she needs to separate her craft from who she is as a person. And, yes, she also looks amazing on the judges’ panel as well.

Earlier this season, I mentioned that I thought Leslie Jones was the best Drag Race judge ever. I may need to amend that comment after being treated by the sexily quirky Jeff Goldblum on the judges’ panel. I mean, he was brought to tears during the lip sync, for goodness’ sake.  He called Ru a “radiant Grecian goddess” (accurate) and said he was “basking in your opalescent glow.” He was a hilarious debate moderator, getting fooled by Jaida and even throwing in a “she done already done had herses” of his own. He also speculates about vajazzling.  During the critiques, he complemented Sherry on her “fine and generous décolletage”, loved Crystal’s fedora and told Heidi, “I do like redheads of all kinds.” I love what he brought to the show and I wouldn’t mind if he returns.

After Jaida scored the win and Gigi narrowly escaped being in the bottom two by the feather on her cap, it’s down to noted lip sync assassin Widow pitted against Jackie for a lip sync for the ages. If I were Ru, this would have been a “double sashay” as Jackie brought so much passion and Widow brought so much of what makes her a lip sync assassin. This was definitely the lip sync of the season so far. Ru made her choice, and sadly, it’s the end of the line for the Widow Von’Du, but I think we’ll definitely be seeing more of her.

And that’s it for this week’s episode of RuPaul’s Drag Race. Until we meet again, stay safe and healthy and if you can’t love yourself, how n the hell are you gonna love somebody else? Can I get an “Amen”?