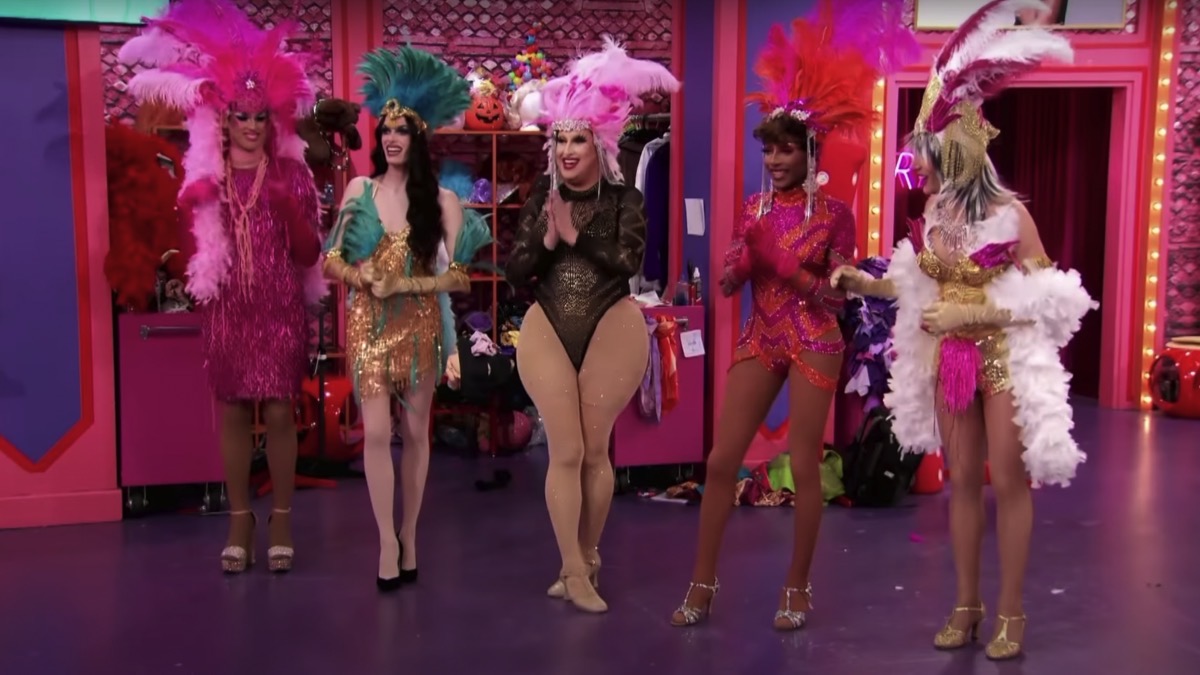 Well, we are at the last challenge episode of RuPaul’s Drag Race. Last week, we had to say goodbye to Heidi [Last name TBD] and this week, we learn who has the charisma, uniqueness, nerve and talent to make it to the series finale and the chance to be America’s Next Drag Superstar.

This week, the theme is Sin City, as the queen-testants channel their inner showgirl and perform numbers inspired by the RuPaul’s Drag Race Live! show that was running in Las Vegas (not sure if it will be back, so we at least have part of the experience captured on film for posterity.)

This episode is a little lackluster, and it may be a bit of burnout from the 3 hours of drag programming we’ve been watching for the past few weeks, but there were a few highlights, so let’s take a look at the top moments from the episode.

After the elimination, the queens come into the werk room and are greeted by a lipstick message from Heidi (Something) telling them to stay “sssoft and ssssupple” (does everyone already miss her?) A power outage sends the queens into the Untucked lounge to chat about their successes and failures, and Jackie is nervous. She says, “I will now officially take the title of Susan Lucci of season 12 from Miss Crystal,” she says, to which Crystal responds: “We’re in the home stretch and I’m feeling confident and I can taste the top four. I need it really bad!” She sure does, because if they are judged by “report cards” for the season, our Persian Princess could be a goner.

The next day, Ru gives the dolls their last mini challenge and our last quick drag of the season, as the queens have 30 minutes to assemble their own over the top, one of a kind showgirl headdress and serve up some Nomi Malone realness. Feathers fly, beads cover the floor and the queens take the stage for “Viva Drag Vegas.”

Jaida, a/k/a Toffee looks like a Mardi Gras float in pink and orange. Her show is known as “Huh?” because of her confusion. Gigi made a spectacular emerald green feathered headdress and added the same feathers to a gold dress. Crystal is also in pink, from her giant headdress with feathers in shades of light and hot pink to her fringed dress. Ru helpfully tells us that, “On the Las Vegas strip, they call her ‘slut’.”

Jackie goes for the gold with a salt and pepper wig. Ru says, “after midnight, they call her ‘fuzzy box.’” Gigi (of course) is the winner and has no advantage for the maxi challenge. She does, however, win a trip to Las Vegas and tickets to RuPaul’s Drag Race Live! Gee, I hope she (and her Mom) got there before Miss ‘Rona shut everything down.

In the maxi challenge, the queens are tasked with performing a medley of original songs from the Vegas show. Jamal Sims will take them through the opening number, the first act closer and a disco finale. The queens also have to write and record their own verse for a show-stopping number.

As the queens get ready for their final challenge, they all recollect on what they thought about their competition when they all first entered the werk room. Gigi says when she saw Jackie’s spring and fall fashions, she thought she was going to be her biggest competition but shadily adds “since then, she has changed my mind about that.” Jackie said she was confused by Gigi’s pirate entrance look, calling it a costume and calling her a “campy queen” – that is, until she saw her spring and fall runway fashions.

Gigi regarded Jaida as “another pretty girl to fight with” and Jackie admitted she really didn’t take notice of Jaida until the improv challenge when she was painted as a sad apple. Everyone agreed that Crystal was the most improved from the start of the season. I love the camaraderie between these girls and know it’s going to at least be a good top 3.

Bring it to the Strip

I don’t know if not having seen RuPaul’s Drag Race Live! in Las Vegas (not that I didn’t try…stupid coronavirus) matters here, but the whole main challenge wasn’t really memorable. I think one “Rusical” per season is plenty and I think the one-woman shows should have been a stronger choice for the final challenge.

The songs are pretty terrible, but the queens looked polished and gave their all. They strutted onstage in their entrance looks for the bouncy “We Made It” and donned negligees and robes while they contemplatively sang into mirrors for “Just the Mirror and Me Know” (Gigi and Crystal came out the MVPs in this number, but, God, the song is pretty tragic.) The big disco finale “Losing is the New Winning”  was entertaining.

Everyone looked fabulous and nailed the choreography (Gigi and Jaida’s legs…I mean, really…) The raps the queens recorded, despite them all being less that confident about them, were all pretty solid. Ru seemed pleased, and that’s really all that mattered.

This runway was all over the place and I kind of liked that, as we got something unique from every queen. I honestly don’t know what to make of Crystal’s “asymmetrical, puffy-legged, high-waisted, ruched, blue velvet, double necklace, turban, blue makeup” look. I think the odd padding threw me off, but the blue makeup is distinctively Crystal and I do love that. Gigi gave us head gear glam, wearing a gorgeous light blue ensemble with pink accents and a long, flowing jacket. Her hair was red curled perfection and yes, she had on glittery head gear. She was the nerdy, dweeby girl at the 80s prom that no one wanted to dance with. I can relate.

Jackie gave us 50s dream girl in a beautiful, Christian Dior-inspired polka-dotted, bow-topped dress with a huge pouf skirt (with crinoline and hoops). Her blue hair, gloves and shoes were a nice treat. Sherry gave us a blue Mae West/Hello Dolly look (which was actually quite lovely. Kudos to the designer.) Jaida looked regal in a gold coronation gown. She says she looks like a goddess and she’s 100% correct.

Gigi wins yet another challenge and Jaida and SP join her as three of the final four. This leaves Jackie and Crystal (for the first time) lip-syncing for their lives and the last spot in the finale. This week’s song is “On the Floor” by Jennifer Lopez and Pitbull (who my mother still refers to as “Potbelly”, which makes me giggle every time I hear it.)

Both queens gave it their all, although Jackie violated one of the primary rules of performing in front of Ru – she took off her shoes.  Crystal recycled some of her moves from last week’s one-woman show because, if it ain’t broke, right? She definitely was favored in the edit, and I couldn’t keep my eyes off her.

My favorite moment was at the beginning when Pitbull says “J-LO!” and Crystal looks up, trying to see where the voice is coming from. It’s a small but hilarious moment that made the performance for me. And, not surprisingly, the season’s Susan Lucci, Jackie Cox, is the one who has to sashay away. And that’s a shame. But, I have to ask, since SP isn’t taking part in the finale, doesn’t that mean our top 4 should be Gigi, Jaida, Crystal, and Jackie?

Next week, the season 12 queens (well, most of them) are returning for the RuPaul’s Drag Race Season 12 Reunion. It will be “a virtual slumber party hosted by RuPaul, which features conversations about life during quarantine, recaps of the season’s most shocking eliminations, and burning questions from fans.”

And then, on May 29, the finalists will virtually lip sync for the crown. So, until next week, just remember that if you can’t love yourself, how in the hell are you gonna love someone else? Can I get an “amen”?