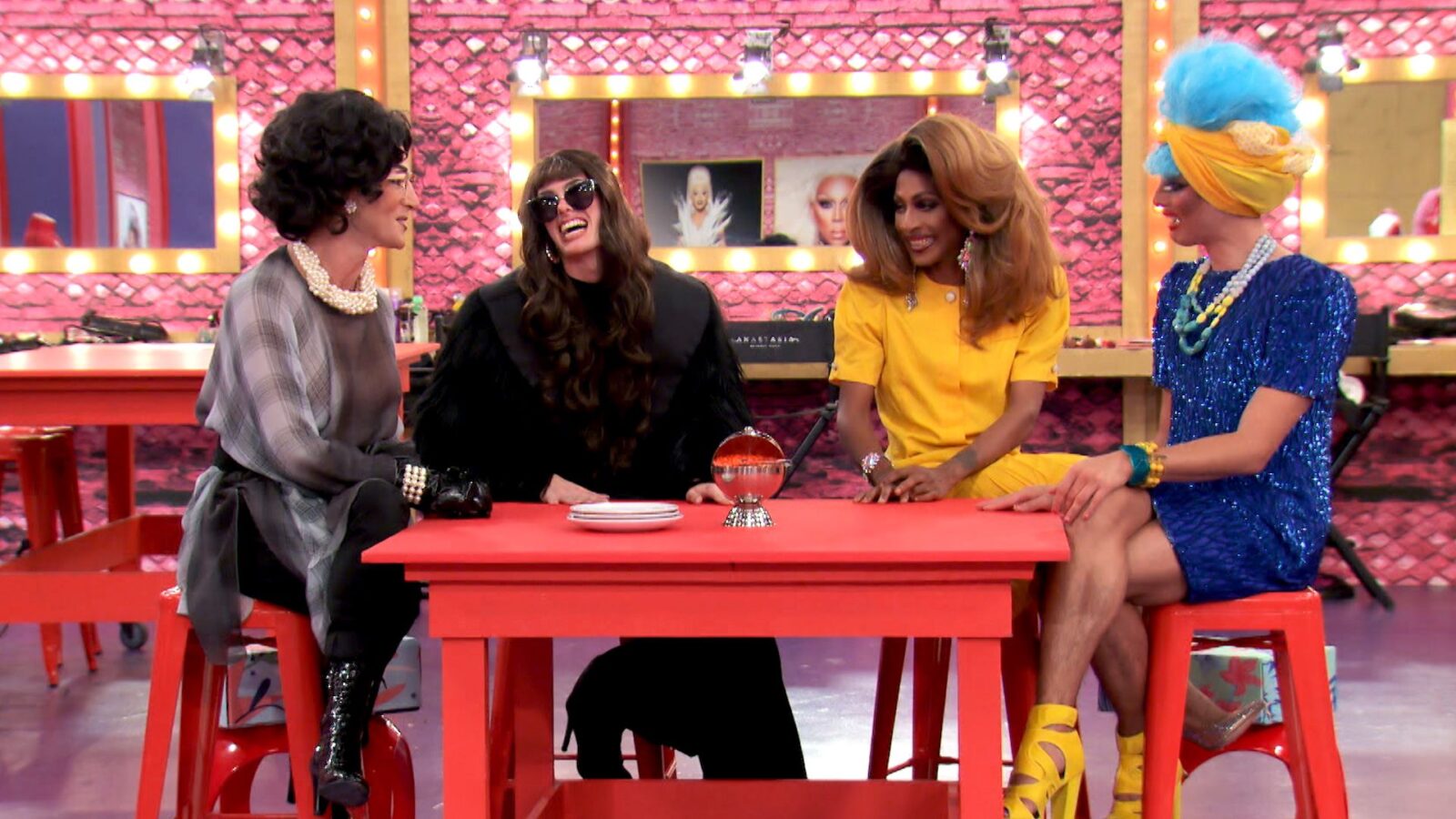 We are down to eight queens on RuPaul’s Drag Race, after having to say goodbye to Brita, who I think is from New York.

This week, the queens have to bring their charisma, uniqueness nerve and talent to a useless product in a spoof of the insane and indulgent Goop brand in a challenge that sees some queen-testants rise and some flail and fail to win over the judges – including the iconic Chaka Khan. The runway fashions feature the queens in the polar opposite of a white wedding as they showcase stunning black wedding gowns.

There’s lots to cover in this episode that will leave you gooped and gagged, so let’s look back at the most memorable moments from the episode.

Last week, I predicted a meltdown from Jan after she failed to win the Madonna musical challenge. I was not wrong – but it wasn’t as much as I thought it would be. As the queens came back into the werk room, they saw Brita’s lipstick message, which brought Jan to tears. She said she know how much Brita wanted to win and it sucked to see one of her best friends go.

Jackie brought up the fact that she was surprised that Jan didn’t win the challenge and Jan replied that she’s frustrated because she thought that this challenge was the one that was going to get her a win. She then turned on the waterworks and went back to lamenting the loss of Brita. While the queens (especially Jaida and Jackie) were all like, “Sure, Jan” the two have had a long history together and Jan’s got the receipts.

This week’s mini-challenge combines my favorite things – quick drag, shade, and beauty products. Ru (in a signature Klein Epstein & Parker suit) breaks the queens into pairs and has them curate a box of products from Fab Fit Fun for their “bosom buddies.” Ru matches Gigi with Jackie, Crystal with Jaida, Heidi with Jan and Widow with Sherry. They have 15 minutes to get into drag, stuff their boxes and get ready for a bosom buddies kiki.

Once the queens are done, the pairs are pitted against each other for one shady meetup. Jackie and Gigi kiki (compete with Tic Tacs!) with Crystal and Jaida (who looks like she spent more than 15 minutes getting ready.) Gigi gifts Crystal (and her “terrible” makeup) with a “season one filter”, a towel to use to cover the camera. Jackie gave Jaida some lotion that was cruelty-free, unlike her performance as Cardi B in Snatch Game.  Crystal gave Gigi facial cleanser so she can “wash both of her faces” and Jaida gave Jackie sunglasses (which backfired on her because Jackie used them to say how much better Jaida looked when she had them on.)

Next up, Heidi and Jan and Widow and Sherry. Jan gave Sherry a blanket that was heavy, “just like you.” Widow gave Heidi a mug – top replace her “busted” one. Heidi gave Widow some luggage “that you can pack when you get sent home” and Sherry gave Jan a terrarium she could water with her “salty crocodile tears” that would keep her company after losing her “best friend.” Ouch. Our winners are Gigi and Jackie, who both get $1000 and a one-year subscription to Fab Fit Fun.

The main challenge this week is for the queens to join in on the celebrity lifestyle and beauty trend and create a new, extravagant and completely unnecessary product for the new drag lifestyle brand, droop. (I love the fact that they used Dahlia in her broccoli outfit as part of the logo.) In addition to creating a product, they need to sell it via their own ad, directed by Biggest Loser trainer Bob Harper.

Heidi, confessed that she only made $9000 last year (working at a gas station) cracked Ru and Bob up by using her tooth gap to make “soft and supple” sing, but Ru told her to get her ass out of Ramseur and come up with something more creative…like “Hydrating Heidi”, perhaps? Heidi joked that now Ru has the trademark and Ru countered that she might just see Heidi in court. So, of course, Heidi immediately changed her product name based on Ru’s suggestion and in the confessional, Heidi said she would give Ru a “generous” 2.3% on all of her products.

The queens all start working on their ads with Bob. Jackie recalled that as a kid, she heard Barbara Eden speaking Persian on the first episode of I Dream of Jeannie and, from that moment on, Jackie was a fan. She’s in full Jeannie regalia for her ad for “Jackie’s Magic Carpet Merkin” and has both Bob and the Pit Crew puzzled as she attempts to recreate the old school special effects of shows like Jeannie and Bewitched.

Gigi is a little low energy in her ad for fragrance and sleeping aid, “Goode Night Bitch.” Jan is at 150% intensity and is asked by Bob to tone it down.  Jaida keeps covering her microphone and Heidi was cracking Bob up when the cameras weren’t rolling but was having a hard time selling her lotion on camera – but she brought out her inner actress. Poor Widow was having a really hard time remembering her own lines. Uh-oh. Crystal also left Bob scratching his head as she put together her ad for Crystal Mullet.

When the finished ads air, Jackie’s merkin spot is well-written and funny and it gets raves from the judges who love the cheesy 60s vibe. We also get to witness Ru educating R&B legend Chaka Khan about merkins, so there’s that. Jan’s ad for her “Sure, Jan” spray is still pretty intense, but it’s cute as she gives us vintage Jan Brady using the spray to become the fabulous, death dropping and songstress superstar she is. Jaida starts her ad for her tucking panty, “Luxuratuck”, by dubbing herself the “terrible actress from Gay’s Anatomy” and the spot gets funnier from there. Gigi really does kind of sleepwalk through her ad for “Goode Night Bitch” which earns a resounding “meh” from. Michelle.

Since Sherry has been significantly cut from the season, there’s no build up or context behind her “Aura Pie” product, but the ad is pretty lackluster so we can just move on. Heidi is hilarious in her ad for “Heidi’s Hydrates” and Ru notes that she took the name idea from her and jokes that she now owns 51% of Heidi’s Hydrates. Widow’s ad for “Throaté” also failed to miss the mark – and she knows it.  Fortunately, Chaka says she sees great promise in her. Crystal’s ad for “Magic Mullet” has an 80s look and a hilarious moment where she is literally hammering a wig.

It’s a Nice Day for a Black Wedding

This was one of the strongest runways I’ve seen on the show in a long time with all of the queens delivering. Jackie had a fully realized concept for her bride. She was “a beautiful bride waiting for her husband to come home from war.” Unfortunately, she receives a letter and the wedding has become a funeral. She looks lovely in her tea-length black lace dress. Jan looks amazing in layers of crinoline, organza, sparkle, shimmer, lace and feathers. She swallows her ring and as a parting shot, shows the words “I Don’t” on her tulle train. Jaida stuns again in a mermaid gown with jeweled accents.

Gigi’s look was inspired by classic Christian Dior with a cinched top and a full skirt. Her platinum blond hair was styled in 50s-era waves. Sherry gave ghost bride realness (I know, I know…but the gown is gorgeous) and Heidi knocked it out of the park with a beautifully structured gown (the judges pointed lout it was her best look so far.) Widow wore a sequined gown with a rain and had spooky eyes, complete with black contact lenses. Crystal also went the spooky route, serving a bride who emerged from the grave and was in search of her love. I’m glad I didn’t have to pick a favorite.

This is My Lip Sync

Ru declares Heidi the big winner this week (yay, Heidi!) and it’s down to Widow Von’Du and Jan. The pair lip sync to Chaka Khan’s “This is My Night.” Jan struggled with her reveal, which never bodes well for these things. Jackie says that Widow is “really selling the words and the emotion of this song” and adds that “I think Chaka Khan’s soul has entered Widow and is coming alive on the stage.” She’s 100% right. See what happens when Chaka Khan believes in you?

Widow doesn’t have the reputation as a lip-sync assassin for nothing. It’s not that Jan didn’t sell it; she was just outperformed by Widow and is the queen who has to sashay away. All I know is that I can’t wait to hear Jan sing this song on “Jan’s Jukebox” this week.

And with that, we wrap up our ru-cap for the week. We’re down to the final seven, with more fabulousness to come – and the debut of Celebrity Drag Race next week. Until next week, take care of yourselves and if you can’t love yourself, how in the hell are you gonna love somebody else? Can I get an “AMEN”? Byeeee!