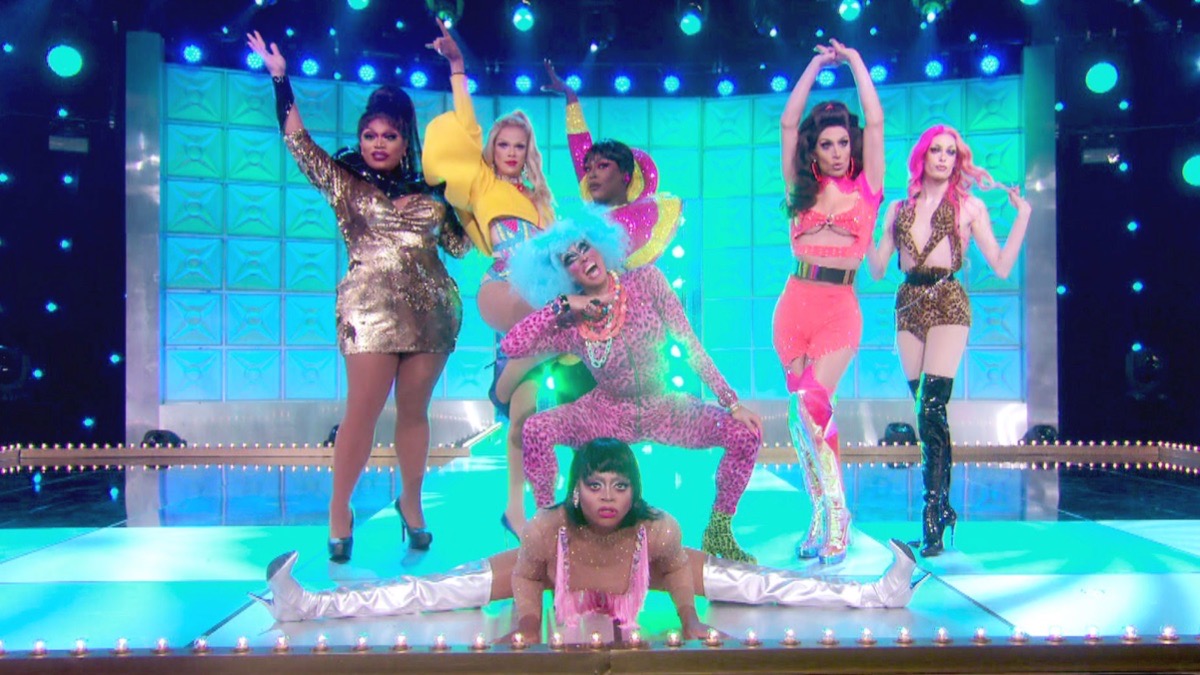 Hello, hello, hello! We are leaping into March with a new season of RuPaul’s Drag Race (make sure to check out our recap!) Along with meeting the new queens, we have news, updates and videos from your favorite Drag Race alums.  We’ve got a lot to share, so let’s bring it to the runway.

Season 12 of RuPaul’s Drag Race kicked off with a bang, and one of the most entertaining premieres in quite a while. If you’re looking to place your bets as to who will take the title of America’s Next Drag Superstar, you might want to consult with Reddit’s r/rupaulsdragrace community. Redditor u/PCP1120 surveyed the community on their Season 12 pre-season predictions, and the more than 2500 Redditors in the community, they’ve made their decision.

With 33.8% of the vote, Gigi Goode is predicted to be the big winner. And, as to who they feel will be the first to sashay away, the group is leaning towards Widow Von’Du. Other predictions include who will make it to the halfway point, the top 4, and who Redditors want to see win. (Their predictions have been right before.) What queen is your favorite to win?

The season 12 queens talked about the upcoming season during a Build broadcast hosted by Miz Cracker. The cast discussed how they prepared for the season, share their opinions about each other, posit why the season will be the best ever and if it is truly the “rebirth of Drag Race.” Nicky talks about the drag scene in France, the queens share their inspirations, their first drag experiences and what they learned from each other, share beauty secrets and reveal what is referred to as the “Windex of drag.”

Speaking of the first time in drag, the season 12 queens react to pictures of their drag debuts while rocking their “American” promo looks in this fun video from VH1.

A new season of Drag Race means (thankfully) the return of “Fashion Photo Ruview”! Raja and Raven are back to toot and boot the season 12 queens’ promo looks. Oh, how I missed these two.

Some other Drag Race alumni, including Mariah, Ongina, Jujubee, Trinity the Tuck, Derrick Barry, Alexis Mateo and their UK sisters Vinegar Strokes and The Vivienne share with us what they want to see on season 12. From some off the wall runway challenges to their dream lip-sync songs and Snatch Game characters, these dolls have a lot of opinions.

Congrats to the winners of the 2020 Queerty Awards! Willam and Alaska once again won best podcast for “Race Chaser” (as they well should have). EastSiders, which starred Willam and Kit Williamson won best Digital Series. Katya was crowned Drag Royalty and Nina West was named Future All-Star. Trixie Mattel’s Moving Parts won for Best Documentary and her “Yellow Cloud” video took top honors as Best Indie Video. And, possibly not surprising, RuPaul’s Celebrity Drag Race nabbed the honors for Next Big Thing. Other winners included Lizzo, Billy Porter and Jonathan Van Ness. Check out the full list on Queerty.

Did you catch that hot new music release on Friday? No, not THAT one. Morgan McMichaels takes us back to the 80s for a dance party in the video for her new single, “Ass Like Mine”. Morgan delivers a fierce track with cameos from queens Delta Work, Mayhem Miller and Kimora Blac as well as Rebecca Black (remember the song “Friday”?) and tabloid fixture Phoebe Price.

For those of you Trixie Mattel and Katya fans who were eagerly awaiting the second part of their chat about the great outdoors on their hilarious web series ‘UNHhhh”, “Walking Children in Nature Part Two” has arrived.

Trixie was also the subject of a BUILD interview where she discusses her latest album “Barbara,” working with Lavender Country and her new sound. She also gives a preview of her “Grown Up” tour, which she said is going to be “psycho.”

On our favorite podcasts, Mano Agapion welcomed “Race Chaser” producer/entertainer Big Dipper and the insanely popular queen Meatball to “Drag Her” and the trio discussed the queens of season 12. Willam and Alaska talked about the “filler” pre-finale episode of season 4 and chat with Jiggly Caliente on the last “Race Chaser” Classique for a while and dished out some “Hot Goss” over at Forever Dog.

The gorgeous Scarlet Envy is the latest guest to kiki with Jonny and Lady Red on “Hey Qween!” She discusses her path to Drag Race, her experiences on the show and lots more. Check out part one below and don’t miss part two and three on YouTube.

Jaymes Mansfield proves she’s a triple threat in the world of beauty – she’s made fabulous wigs, created amazing makeup looks and now, she’s here with a sewing tutorial, teaching you the basics of stitching and darts by making a 50s-inspired Barbie doll dress.

On PopBuzz’s “Portrait Mode”, Sasha Velour, who has never painted, creates a self-portrait of she and her sweet dog Vanya Velour while talking about art, her childhood, learning to fit in as a high schooler, how drag has transformed her life and reveals her favorite and most influential queens. She also talks about her show, “Smoke and Mirrors”, which sounds like a must see. I have to admit, Sasha’s painting is really charming. I think she may have unlocked another talent.

Willam is also a crafty queen, and in the latest installment of “Crafternooning!” he shows you how to bedazzle a wig by attaching crystals to the lace. The end result is stunning and, really, would we expect any less from Willam?

Silky Nutmeg Ganache and Mercedes Iman Diamond are here to help you bring “opulence” to your next gathering as they whip up a peachy cocktail and some deep fried deviled eggs on “Silky’s Snack Shack.”

I’m not ashamed to admit that I am not hip on the cartoons the kids are watching right. Now, but I love Nina Bo’Nina Brown’s amazing makeup transformations. This time around, she becomes Lovely Space Princess (LSP) from Adventure Time.

If you just want to see how Nina glams up, she also released a video where she transforms from trade into a runway-ready goddess.

Another queen with a propensity for purple is Ra’jah O’Hara. On Matty Rants’ web series, “Paint Me Sis”, Ra’jah turns Matty into his drag alter ego, Peaza Cake and makes him over using her signature shades of purple. I really think Ra’jah got the villain edit on season 11 because she is sweet, funny and entertaining here – and I would love a violet makeover.

Get ready to get physical with Mrs. Kasha Davis. On “Out and About”, you can check out Kasha swinging a kettlebell, lifting weights and looking fabulous doing it.

On the latest episode of “Alyssa’s Secret”, our dancing diva is looking for love online. She shares some tips and tricks to winning her heart and teaches the rules of online matchmaking.

This past week, Alyssa took part in a parade during Australia’s Mardi Gras celebration. To promote her appearance, she was interviewed by The Project and taught the crew the fine art of tongue pops, death drops and the point and walk.

Honey Davenport and Aja dropped a new single, “Draw the Blood.” Honey, who also made her directorial debut with the video for the song, said. We had the chance to check-in and chat with Honey and they’re as sweet as their name implies – stay tuned for our exclusive interview!

On the latest episode of “Drag My Dad”, Scott wants a relationship with his son Keith and the two aren’t finding a connection. In an attempt to be a part of his son’s life, he worked with Bob the Drag Queen to transform into the ultimate drag superhero. Will they find a common ground through the magic of makeup? (Side note: They always get such cute dads on this series, don’t they?)

Bob and Monét X Change are taking their “Sibling Rivalry” show on the road. The 36-stop tour, billed as “a night of make-believe, makeup and Sibling Rivalry”, kicks off in (my hometown) Atlanta on July 8 and ends on September 10 in Charleston, South Carolina. Tickets are available now at bobandmonet.com.

Miss Fame called out the fashion industry over its treatment of gender non-conforming models. The fashion-forward queen, who announced they identified as they/them called out the industry and demanded they pay queer artists equally. Fame says that, “Compensation is key to respecting artists. Starving queer or gender non-conforming people out financially, just to look inclusive, while you budget countless ‘influencers’ is backwards thinking and wrong.”

Nina West continued her crusade to bring drag culture to the children with her latest song and video for “The Drag Alphabet.” The song is catchy and the video is adorable – while serving an important purpose. Nina told Billboard that “I have wanted to build a really solid foundation of a relationship in children’s spaces for drag, and for drag entertainment to enter those spaces. So what a better way to revisit this idea and this topic than to start with the alphabet?” If you haven’t checked it out yet, do yourself a favor – and share it with the little ones in your life.

Derrick Barry and Kimora Blac share their knowledge of the Great Wall of China, the Great Pyramids, Stonehenge and the other wonders of the world as they are tested on the latest episode of “Wait, What?”

That’s it for this week. Until we meet again, everybody say LOVE!