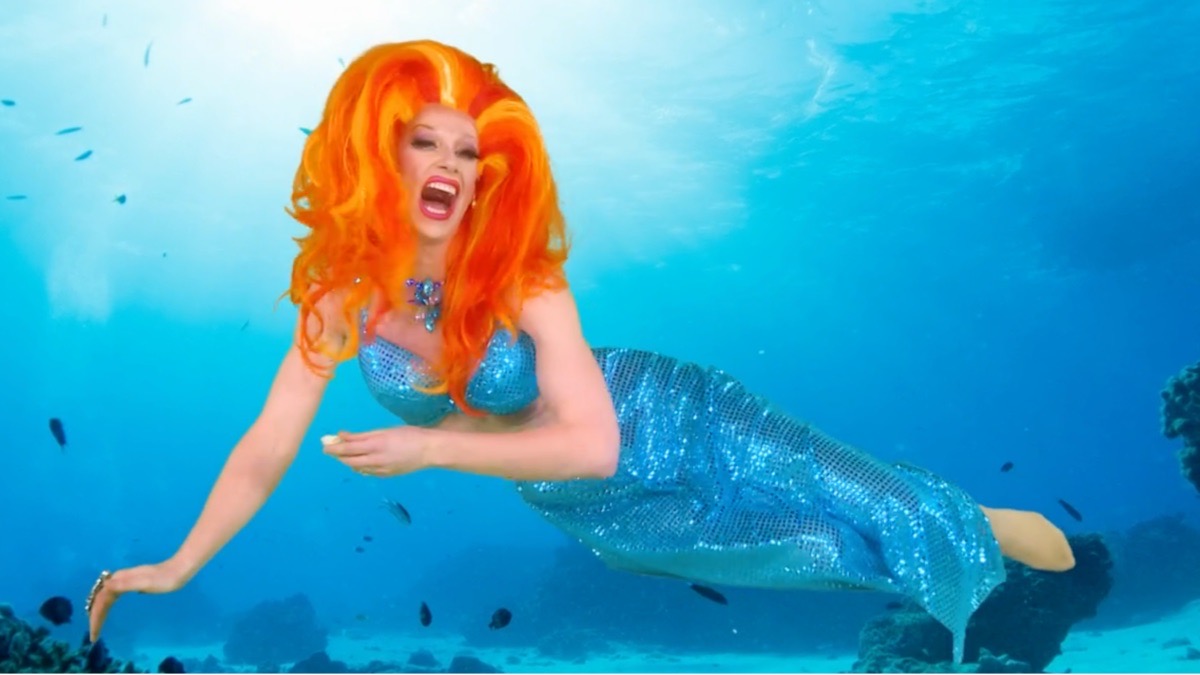 Hello, hello, hello! The holidays are drawing near, and the queens of RuPaul’s Drag Race have lots of gifts for you.

Get some holiday sparkle with a little help from Ariel Versace, make sure your wig game is on point with Jaymes Mansfield and be ready to hit the dance floor with moves from Divina De Campo and Scarlet Envy.

Take a break from Christmas shopping and present wrapping and check in with your favorite queens.

You know you’ve done the choreography in your room, but now, thanks to Divina De Campo, you can now do the Frock Destroyers “Break Up (Bye Bye)” dance with confidence, as she takes you through the moves.

Want more? Divina also shows you how to replicate her groove from her video for the incredible danceable “Drag Race Song.”

Our other top queens from Drag Race UK, Baga Chipz and The Vivienne are back for another serving of “Morning T&T.” On this episode, Baga’s Thatcher and Viv’s 45 welcome guest Kim Woodburn, the “Queen of Clean” who Viv also (accurately) impersonated on Drag Race. Kim takes faux Trump to the library for some reading and cleans the floor with him. Oh, how I love this show. If you don’t have WOW Presents Plus, you’re really missing out.

I love Morgan McMichaels, not only because she is a fierce queen, but because she is a virtual encyclopedia of musical knowledge. Her podcast, “Funk What You Heard” is supremely entertaining every week, and in the latest episode, Morgan treats us with some of her favorite Christmas tunes, including songs from the Spice Girls and (of course) RuPaul. Give it a listen, especially if you’re “bah, humbug” about the holidays.

They’re known for performing in clubs, but can queens also slay in the kitchen and behind the bar? Asia O’Hara and Kameron Michaels find out, as they work for a day at famed West Hollywood nightclub Micky’s on the latest episode of “Can Do Queens.” Asia and Cameron whip up some cheeseburgers and fries and mix some drinks. I am down for a raspberry mojito, but the “Adios MF” with vodka, gin rum tequila triple sec and blue curacao, sounds like a headache in a glass.

Our favorite ear-pleasers, Willam and Alaska revisit season four’s “WTF” wrestling challenge on “Race Chaser Classique”. In lieu of “Hot Goss,” this week, the dolls present a recording of their recent “Race Chaser Live” show from London – with special guest Courtney Act. On “Drag Her”, the latest contestant on Mano’s “Who Wants to Be a Fake Drag Race Winner” is actor Johnny Sibilly. Johnny played Pray Tell’s (played by the iconic Billy Porter) boyfriend on Pose and makes for a great guest.

As always, Willam is one insanely busy queen. She shows you how to apply her fabulous Coverboy glitter jelly in a very NSFW tutorial and takes Allure on a tour of her dressing room and studio.

Willam and Rhea Litre are here to wish you a Feliz Navidad and teach you some new Spanish words on the latest episode of “Como Se Dice?”

Another queen who has become synonymous with makeup is Trixie Mattel, and she’s really the gift that keeps on giving. She spills some tea on Drag Race and shares her beauty tips in this video with Manny Mua and talks to the AV Club about how she set out to create a makeup collection for the kid in all of us. If anyone wants to buy me a Christmas present, anything from Trixie’s collection would be a welcome addition to my stocking.

In a special, holiday-themed episode of “Besties for Cash”, Silky Nutmeg Ganache and Vanessa Vanjie Mateo answer questions about each other in the hopes of making some Christmas present spending dough. These two really seem to know a lot about each other and are more than happy to share even more about themselves.

Drag queens, as we all know, are consummate performers, but they can’t always do it all. Season 11’s Scarlet Envy was a target of the judges for her lack of dancing skills and she’s ready to learn how to be a better dancer – and thankfully she’s taking us along for the ride. On the debut episode of her new web series, “Envy of My Boogie”, now streaming on WOW Presents Plus, Scarlet gets some schooling from “Master of Reveals” Mark Kanemura.  Here’s hoping she can show off what she learns on a future season of All-Stars.

Jaymes Mansfield is back to perform even more wig transformation magic in another entertaining video. This time, we hop into the wayback machine and travel to the 1970s, when Eva Gabor wigs were all the rage and Jaymes serves us some “70s pool party” realness.

Another crafty queen is the beautiful Yuhua Hamasaki, on this episode of her web series, “Sew What,” she teaches you how to highlight your shoulders with some decorative epaulets.

I have worn a lot of makeup for a long time, but I still don’t “get” highlighter. Fortunately, Ariel Versace is here to help, and she shows us how to use Jeffree Star’s new Extreme Frost Highlighter collection to add some holiday sparkle to your face.

Season ten queen The Vixen is back, this time giving a drag makeover to charming Australian actor Keiynan Lonsdale from Love, Simon (he was also a judge on All-Stars 4).

While the mug is being beat, the two have an insightful discussion about identity and showing one’s true self. I really like The Vixen and would definitely like to see more of her – and Keiynan is adorable, in and out of drag.

House of Edwards queen (and 420 enthusiast) Laganja Estranja (who is no longer feeling attacked) discusses Mary Jane and lots of other topics with the help of Grant Vanderbilt on this episode of “Puff Puff Sessions.”

If you’re still in search of a gift for someone special that they are sure to not return, a subscription to WOW Presents Plus is the perfect present. In addition to shows like “Morning T&T” and Scarlet’s new show, you’ll have access to holiday specials from the queens.

On Sunday, Miz Cracker is back with “Jewtorials: The Hanukkah Special”, where she teaches you everything you need to know to slay your way through those 8 crazy nights. And, on Monday, our favorite dancing queen, Alyssa Edwards is back with a special Christmas episode of “Alyssa’s Secret,” followed by the sixth season of her web series, which debuts on January 6.

And I was worried this was going to be a slow news week! That’s all for now, but fear not, I’ll be back with the last Week in Drag of the year (and the decade!) next week. I hope you have a wonderful holiday – whatever you celebrate and have a fierce week!