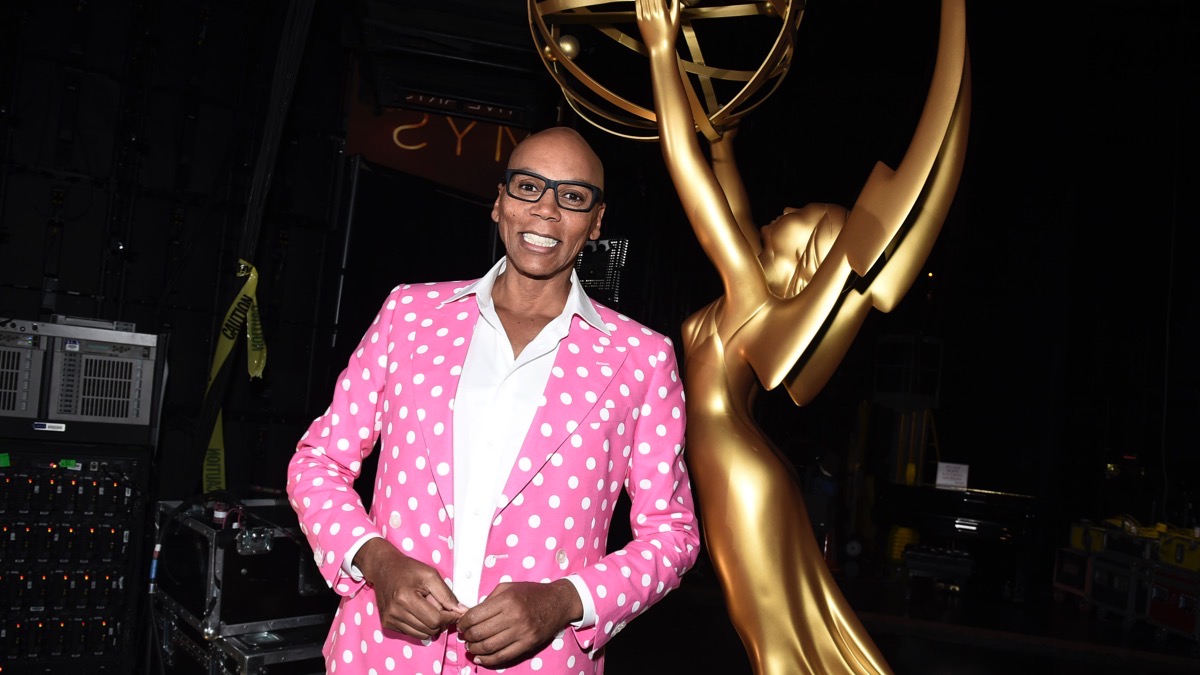 Drag Race isn’t the only show recognized by the Emmys this year. The HBO series We’re Here – starring Shangela, Bob the Drag Queen and Eureka O’Hara – was also nominated for Outstanding Unstructured Reality Program (going up against Untucked.)

After learning of the nomination, Shangela told NewNowNext, “My journey, going from throwing drinks on Untucked 10 years ago to now being nominated for promoting positivity in the queer world… it’s just really cool.” Bob added, “it feels nice to be a host of a show that is being recognized by people whose opinions I respect.”

Eureka said of the Emmy nod, “It means the hard work everyone put in is touching people’s hearts, it means the show is out there and loved,” she adds. “For me, it also means all the love and support my mom gave me is further validated since everything I do, I dedicate to her.”

If the Dutch have an Emmy equivalent, Ru might be getting one of those next year, as it was announced this week that the franchise is heading to the Netherlands for a new international spin-off.

Coming to viewers later this year, Drag Race Holland is produced by Netherlands based production company Vincent TV Production and Executive Produced by World of Wonder.

The series will feature ten incredible Dutch drag queens who take part in weekly challenges, where the bottom two face-off against each other in a legendary lip-synch battle for a chance to remain in the competition. The judges and guest judge line-up will be announced in the weeks to come. For US audiences, the show will be streaming on WOW Presents Plus.

Announcing the series via a special RuMail video message, RuPaul said; “I am proud to announce that my beloved Drag Race is coming to you.  And with a brand-new host…More info coming soon, so you better watch!”

Season 12 champion Jaida Essence Hall is back! She joins Bob the Drag Queen to dish about the All-Stars finale on “The Pit Stop.” Make sure to stick around for Bob’s own verse for “Clap Back.” It’s quite epic and, thanks to YouTuber Jordan T, you can hear her verse where it belongs.

Raja and Raven are here with the last “toots” and “boots” of the All-Stars season with “Fashion Photo Ruview.” Who’s their top toot of the week? The answer might surprise you.

Nina Bo’Nina Brown serves us a full Princess and the Toad fantasy as she gives her uncensored, unfiltered take on the finale on “Rawview.”

Trixie Mattel joins Yuhua Hamasaki on “Bootleg Opinions” and with her critiques, may have been a better guest on “Rawview.” She holds nothing back and I am so here for it.

Kimora Blac also shares her thoughts on the finale with her video recap. And, yes, I do agree with her statement that she does deserve an award for being stunning.

The top three All-Stars give us access to their phones and reveal their wallpapers, (Shea’s is adorable), some of the recent photos they took (guess who’s growing tomatoes) the number of “personal” photos they have, the last queen they texted, their most famous social media follower and even their Uber rating.

Miz Cracker shares the first and last five things she does every day in this video for Allure.

Mama Ru popped into the new Disney+ series Muppets Now to talk divas and fashion with Kermit the Frog and Miss Piggy. Ru shared that being called a diva is “a term of endearment, it’s a term that really signifies your importance in the industry,” and tells Miss Piggy, “you are the most important female figure in the entertainment industry.” He’s not wrong.

I fancy myself a bit of a DiY-er and have enjoyed Willam’s “Crafternoonting” videos. This week, she brings us a project where you might need a little help. She doubles down on the infamous leg lamp from A Christmas Story and crafts a table supported by her long, toned legs. I don’t know if I’m more envious of the table or Willam’s legs.

And if you need more Willam (who doesn’t?), she’s back with another, all-drag episode of “Smackdown.” See some acrobatic fails, a dubious makeup “artist,” a queen giving you full inflatable, wavy-arm balloon man, an assault with a deadly wig and more.

Violet Chachki shows us how to create a flawless 1940s-inspired makeup look and talks about her new digital drag show, Digital Follies.

Bob the Drag Queen and Monét X Change bring you another episode of their awesome podcast,  “Sibling Rivalry.” The title of this episode is “The One About Blair St. Clair” and, while the top 4 All-Star is discussed, there are lots of other interesting topics covered as these two hilarious queens kiki.

If you didn’t know already, I am a Honey Davenport stan. Being one, I was delighted to see the latest episode of her web series, “Da Fuq.” Her guest this week is Miz Cracker and the two talk about bagels, debate whether or not size really does matter and share tales of their most embarrassing hookups. There’s even a bonus “Florida Man” story.

Trixie Mattel is back playing with dolls. This time, she shows off the new Barbie color reveal dolls. There is now nothing I want to do more in my life than play Barbies with Trixie. Can we make this happen?

Two of my all-time faves, season 2’s Morgan McMichaels and Pandora Boxx kiki and share some of their favorite tunes (and the stories behind why they love them) on Morgan’s podcast “Funk What Ya Heard.” Pandora is my music twin, playing tunes from Bette Midler, Olivia Newton-John (from the “horribly wonderful” Xanadu), Cyndi Lauper and more.

Asia O’Hara takes a look back at some of the most emotional moments from the show on “10s Across the Board.” You better believe the Jujubee/Raven lip sync from All-Stars season one is here, along with some other unforgettable moments.

Jackie Cox, Chad Michaels, and Yuhua Hamasaki show off their yards and get gardening tips with the stars of Bravo’s series Backyard Envy (which kicks off its second season on Tuesday at 10 pm EST.

Shangela is one funny queen, and if the whole “drag thing” didn’t work out, she’d have no trouble touring the world as a stand-up comedian. In her comedy special, “Shangela is Shook,” Ms. Laquifa Wadley takes us behind the scenes of All-Stars 3, episode-by-episode with jokes and musical numbers. Most importantly, she takes a deep dive into the making of “Kitty Girl”, which is still the best finale production EVER.

When you’re a queen in quarantine, it is sometimes difficult to find someone to collaborate with. Coco Peru solved this problem by performing a duet with herself. Watch as she lip syncs to “Bosom Buddies” by Bea Arthur and Lucille Ball from the movie Mame.

Last week, we said goodbye to the wonderful Lady Red Couture. Her “Hey Qween” colleague and friend, host Jonny McGovern has set up a GoFundMe to help her family pay for her final expenses. If you can, help out this iconic queen who left us far too soon.

Honey Davenport debuted an important new video this week for the song “Made Like You.” On her Instagram, she explained that the song is “about how I felt after a really traumatic experience; that night at a bar in NYC, I spoke out against racism that should not be tolerated.” She goes on to add, “All I ever wanted was to be loved equally, and not just treated a little better than other queens of color because of tokenism or popularity. I want that same love for all of my sisters regardless of race or popularity, because love should never be seen as a privilege. Unfortunately, the way this fandom seems to work this very expression of how I feel and my story, if posted by a Caucasian queen would receive 10x more❤️❤️❤️.” Take a moment and give it a listen.

That’s it for this week. Until we meet again, stay safe, stay healthy and Say LOVE!

Zac Efron Is Looking to Make the Move to Australia