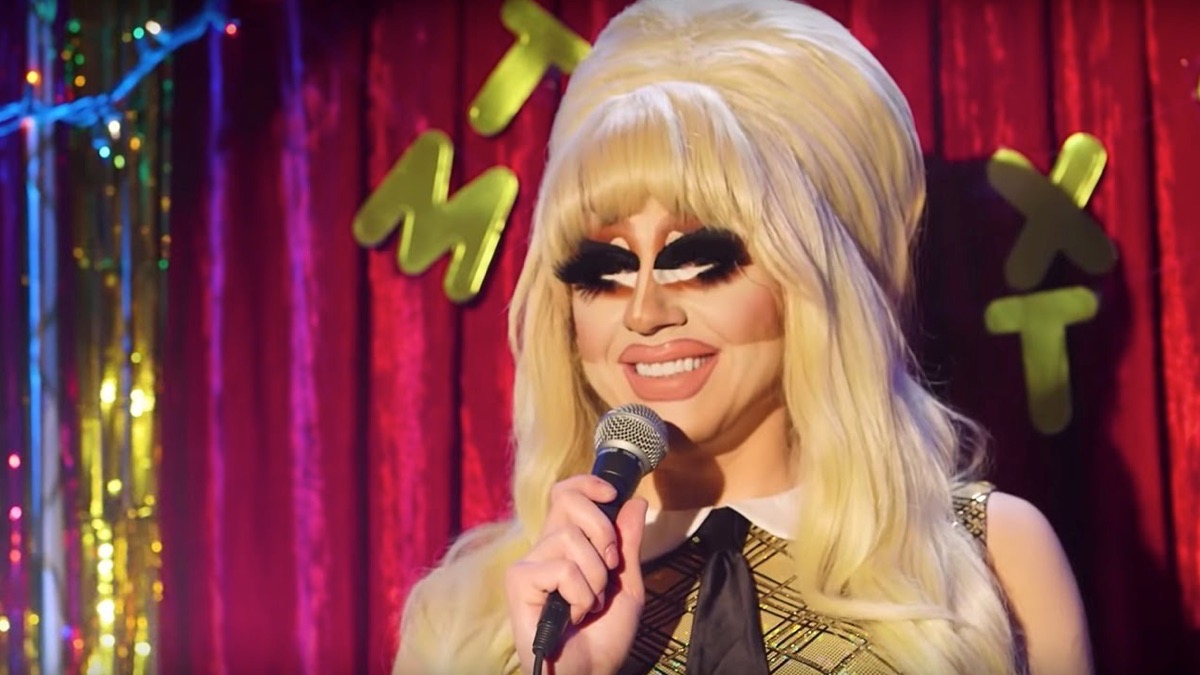 Hello, hello, hello! Welcome to your weekly roundup of all things drag.

This week, we are getting more intel on the queens of season 12 of RuPaul’s Drag Race and are getting excited for the new episodes, which are less than a month away.

Of course, we’ve also got the latest on your favorite Drag Race alums. With her new album dropping soon, it seems everything’s coming up Trixie Mattel, but we’ve also got news from Honey Davenport, Ra’Jah O’Hara, Monique Heart and (of course) the queen with the most hustle in the game, the fabulous Willam. Let’s bring it to the runway!

Entertainment Weekly (lucky them) had a chance to chat with the season 12 queen-testants and they had a lot to say. They also spilled a little tea on their sisters, so EW also uncovered who the cast thinks is the most dramatic, the nicest and the most likely to mop a competitor’s wig.

ET Canada also gave us an introduction to the season 12 queens and shared some interesting trivia. Did you know that Jan Sport was on a recent episode of America’s Got Talent (and sassed off to Simon Cowell?)

If you weren’t excited enough about the new season of RuPaul’s Drag Race, the special guest judge on the premiere episode should have you marking your calendars and setting your DVRs right now. It was announced on Thursday that, following in the footsteps of divas like Lady Gaga and Miley Cyrus, Nicki Minaj will be bringing the ferocity on the runway. In a teaser clip, Nicki is serving up Ruby Red realness and the new queens are beside themselves with excitement. Is it February 28 yet?

Of course, we’ve all seen the new queens in their full drag regalia, but I always like to see them out of their makeup and wigs. Thanks to the internet, we can see what they all look like out of drag. It seems a good-looking man makes for a gorgeous queen and I can see that this season proves that hypothesis. They are all very eye-pleasing, but my personal faves are Brita and OMG, Gigi Goode. That jawline is everything.

It’s not unusual to see former queens give us their two cents about the “new class”, but I am a little surprised to see who was the first to chime in. Well, maybe I’m not. Atlanta’s own Nina Bo’Nina Brown dedicated the latest episode of her web series “Rawview”

We all know that the best part of the Super Bowl is the commercials (and I will admit I am kind of curious about the Jennifer Lopez/Shakira halftime show.) Well, this year, you’re definitely going to want to tune in and witness Miz Cracker and Kim Chi appearing in an ad during the big game. The pair are teaming up for an ad for Sabra hummus (yum) and, believe it or not, they are not the first drag queens to ever pop up in an ad during the big game. That distinction belongs to (who else but?) RuPaul. Mama Ru starred in an ad for Webex back in 2000. Check out Kim and the queen who really has the perfect name for a commercial about a delicious dip in the teaser and don’t miss the full ad during the game.

Let’s talk Trixie. With her new album, Barbara, dropping on February 7, the “skinny legend” is popping up all over. She was a guest on Grace Helbig’s “Not Too Deep” where she talked about her cosmetic line, her documentary (Moving Parts), her Grown Up tour and her personal and professional relationship with Katya.

Trixie also shared some mimosas and chatted with Tiffany “New York” Pollard on her series,  “Brunch with Tiffany.” As much as I love Trixie and Katya together, I could get behind a show with these two – better yet, the three of them.

Speaking of Trixie and Katya, the pair are back for a fifth season of “UNHhhh.” The topic of the first episode is “Women in 2020” and it’s what you’ve come to expect from the show – randomness and lots of laughs. If you want to catch new episodes as soon as they premiere, subscribe to WOW Presents Plus.

Lastly, Trixie debuted a special on Tuesday called “One Night Only” – live from the “Liv Ingroom Theater” in LA (get it?). In the show, Trixie performs in front of an audience made up of her doll collection, sings a few songs from her upcoming album, including a romantic ode to Jesse Eisenberg and gives us a sneak peek at her 29-city Grown Up tour.

Over on the pods, Mano and Nicole review the last 5 episodes of AJ and the Queen on “Drag Her”. Willam and Alaska discuss the season 12 queens on “Hot Goss” and revisit the “Fremenies” challenge on the Drag Race episode that saw Willam disqualified on “Race Chaser” classique. The episode also features an interview with Phi Phi O’Hara, who teased another of her amazing cosplay photo series, saluting the Star Wars universe. I can’t wait for that one.

Another season four queen whose sharing stories and spilling tea about her experience on the show is the stunning Dida Ritz. After watching the latest episode of her web series, “Detailz with Dida Ritz”, where she talks about the “Frock the Vote” challenge that sent her packing with Dixie Lynn Cartwright, and re-watching season four myself, I think we need more Dida in our lives.

It’s been a while since Willam gave us a “Beatdown” of influencers and various other YouTubers, and I can only assume it’s because she’s been saving up to give us a great episode. Which she did. Check out the takedowns of a boring beauty blogger, a man who is VERY fond of his pet rat and lots more.

Can’t get enough of Willam and his wig collection? Well, have we got a treat for you – a fifth installment of “The Wonderful Wigs of Willam.” I would love to spend an afternoon with Willam in this wig room (and I would also love a gift certificate to Wigs by Vanity. Their pieces are amazing.

Speaking of wigs, Jaymes Mansfield is back with another episode of “Wig Wars.” Two queens enter, only one will win the competition. Who are you rooting for (see what I did there?) –  Lenda Jo or her drag daughter Becky with the Split Ends?

Season 11’s Honey Davenport is the guest on this week’s episode of “Hey Qween!” The hottest queen out of drag from last season talks about performing in the “Black Girls Magic” show, creating new music, collaborating with Yvie Oddly and a naughty “Choose your own adventure” video. She also talks about life after Drag Race, growing up in West Philly and her experiences in the pageant world. Watch part one here and catch part two and part three on YouTube.

Did you catch Monique Heart on AJ and the Queen? She killed it a Terri Tory and now she’s bringing the “Ooh Ahh sensation” to your ears with her debut EP, titled Beloved SoS 6.3. Give it a listen.

Peppermint, Bob the Drag Queen, Shea Coulee, The Vixen, Monique Heart, and BeBe Zahara Benet are starring in a new show called “Nubia”, which will be performed March 5 and 6 in Brooklyn, New York. The show’s description promises that, “This all-new show is a celebration of opulence, regality, and pure, unadulterated Black excellence. Featuring five of the most celebrated Queens in drag herstory, NUBIA is a live out loud, show-stopping extravaganza thrown directly in the face of racial division and political divisiveness.” There are no plans for a tour…yet…but if you’re in the New York area, you should get your tickets to see this fantastic line-up.

Kimora Blac and Derrick Barry discuss their bedroom habits and test their knowledge on all things sleep on the latest episode of “Wait, What?”

If you’re a fan of season 11’s gorgeous Ra’Jah O’Hara, we’ve got a double dose of a treat for you with two new videos from this queen who seems to be embracing her inner Prince and looking dazzling in his signature color. In her first makeup tutorial, she shows you how to create a look she calls “Purple Heart.”

Ra’Jah and fellow season 11 castmate Silky Nutmeg Ganache play “Castmates for Cash.” Did spending so much time in the werk room together make these two experts on each other? Tune in and find out. (Side note: Silky looks great here. She’s apparently graduated from using a Sharpie as an eyeliner.)

Drag Race UK’s adorable Sum Ting Wong is following in the footsteps of her DRUK sister Blu Hydrangea and has released her first makeup tutorial. I absolutely adore Sum Ting, and this video is just so stinking cute. Check it out, especially if you want to see how to beat a beautiful mug without having to glue down your eyebrows (which I am terrified of doing myself.)

Yuhua Hamasaki is back with more “Bootleg Opinions”. In her latest video, she and Trinity the Tuck toot and boot the fashions seen on the pink carpet of DragCon UK.

Here’s your Instagram post of the week. The fabulous Morgan McMichaels served up some Alexis Carrington realness at an event for Palm Springs Speaks featuring the legendary Dame Joan Collins. Joan was in attendance to discuss her life and career. Morgan was there to look fierce. Mission accomplished (and Dame Joan looks amazing as well.)

And that’s a wrap for this week. We’ll be back with more as the countdown to season 12 continues. Until then, everybody say LOVE!